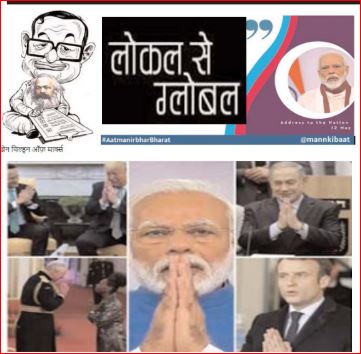 Today, on 20 June 2020, the former Home Minister, Finance Minister P. Chidambaram, after the Indo-China conflict in Ladakh, termed the Chinese goods bycott campaign as unavoidable and said that it would not affect China much.

Chidambaram is also one of the Brain Children of Marx in India. The same Chidambaram, when he was the Home Minister during the UPA regime, invented the words Hindu Terror and Saffron Terror.

On August 24, 2007 in Lucknow, P. Chidambaram said that there was always poverty in India and the fact that it was promoted as a prosperous country was false. He said that teaching that India was rich and milk-honey country 500 years ago is factually incorrect. There was and is poverty in India. Yes, there were definitely rich areas. He said that books teaching the glorious past of India should be burnt. The full news is quoted below the editorial.

The PM had said a few days ago that as a nation today we are standing at a very important juncture. Such a big disaster has brought signs for the country. When this crisis started there were not a single PPE in India, the nominal production of N95 mask. Today the situation is that every day 2 lakh kkkshwash and 2 lakh n-95 masks are being made in India itself.

He further said that the culture and culture of India speak of that self-reliance, whose soul is Vasudhaiva Kutumbakam. India does not advocate a self-centered system when it comes to self-sufficiency. There is concern about happiness, cooperation, peace of the world. Today, India’s medicines reach the world with new hope. These steps are praising India all over the world. The reason for this is the resolve of 130 crore countrymen for self-sufficiency.

>> A video went viral in March 2020 – recitation of ‘Om Mantra 4’ in a hospital in Spain, this prayer to recover from Corona.

It is worth mentioning that in Hindu religious texts, many extraordinary benefits of reciting Om Mantra have been told. On many occasions such claims have been made that many diseases are removed by its chanting.

>> ‘Namaste’ becomes global power, big leaders are joining hands to avoid corona virus. Its photo is given below the editorial.

>> President of Brazil wrote to PM Modi, said- India has given us ‘Sanjeevani Boot’ as hydroxychloroquine medicine.

On the call of Prime Minister Narendra Modi, Khadi is ready to go global from local. After the ban on export of all types of masks was lifted in the Corona crisis, the Khadi and Village Industries Commission (KVIC) is now going to export Khadi cotton and silk face masks. This step has been taken after Prime Minister Modi’s call for “Local to Global” keeping in mind the “Self-reliant India Campaign”. 8 million face masks orders KVIC plans to supply Khadi face masks in Dubai, America, Mauritius and many European and Middle East countries, where Khadi’s popularity has grown significantly over the years.

“Time has taught us that we should make our life mantra Hldhddahl Local।. The global brands today were once local but when people started supporting them, they went global. That’s why from today onwards , Every Indian should be vocal to our local, “said PM Modi

The PM emphasized the importance and use of local products. He said that the importance of local manufacturing and supply chain has also come to the fore in this crisis. It is not just the need, we all have responsibility. Time has taught that local we have to make life spells. Global brands too were once such local but when people started using them, started promoting, branding, they became global products.

Therefore, the Brain Children of Marx P Chidambaram ji, who called the Baikat China campaign as not necessary, should consider the facts given above. They should understand that Vasudhaiva Kutumbakam is the soul of self reliance in India. We have given Buddha to China, but China has given us war(Yudh).