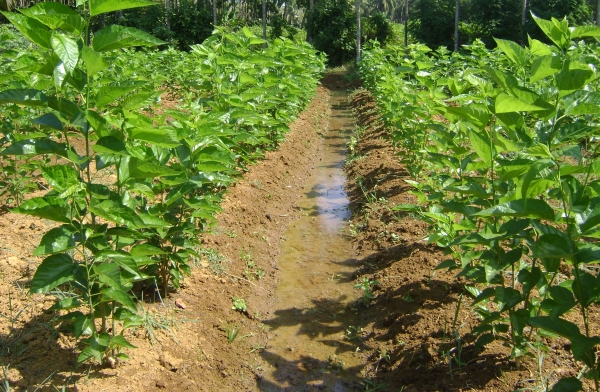 Keeping in view the better prospects of production of mulberry silk in the state, a provision of Rs 5 lakh per acre has been made to marginal farmers for its plantation under the Silk Samagra-2 program. There is a provision of providing assistance of Rs.60-60 thousand per acre to marginal farmers for mulberry plantation and irrigation, Rs.3.25 lakh for Krimipalan Bhawan, Rs.50 thousand for worm rearing equipment and Rs.5,000 for disinfection. The Principal Secretary, Village Industries Department, Dr. Alok Shukla has directed all the collectors of the state to ensure large-scale implementation of the Silk Samagra-2 scheme of the Central Government with regard to planting of mulberry saplings and promoting the production of mulberry silk. Principal Secretary Shri Shukla has said that there is immense potential for production of mulberry silk by planting mulberry saplings in Chhattisgarh. There is a huge shortage of silk in the country at present, so whatever silk cocoons will be produced, it is also likely to be sold immediately. Silk Samagra-2 scheme has been prepared by the Central Government, under which there is a provision to give 5 lakh per acre to marginal farmers for planting mulberry on the land of farmers. Principal Secretary Dr. Shukla has mentioned in his letter that according to the Silk Samagra-2 scheme, 80 percent of this amount is to be borne by the Central Government, 10 percent by the State Government and 10 percent by the silk farmer. According to this, out of 5 lakh only 50 thousand rupees have to be borne by the farmer. The work of mulberry plantation in the fields of marginal farmers can be done under MNREGA and the wages which will be paid under MNREGA can be considered as the contribution of the farmer concerned for this scheme. Even after this, if necessary, efforts should be made to get loans from banks. It is also worth mentioning here that under the Rajiv Gandhi Kisan Nyay Yojna by the Chhattisgarh government, there is a provision to give 10 thousand rupees per acre per year to the farmers for crops other than paddy and PM. Under Kisan Yojana, 6 thousand rupees are given every year to the eligible farmers. Annual income of Rs. 1 lakh 29 thousand 600 is possible to the farmers from cocoon production by planting one acre of mulberry. Red loam soil and such areas are suitable for silk plantation, where there is no water logging, mulberry plantation needs irrigation. For which arrangement for drip irrigation can also be done under this scheme. Principal Secretary Shri Shukla has asked the collectors to prepare a cluster wise plan of their district for plantation of mulberry plantation on private land for 250-500 farmers in the district and send it to Dr. Rajesh Baghel, Additional Director Silk Mobile Number – 9977839369 soon. He has said that by having all the farmers in the form of a cluster, all technical and economic services will be made available to them in a better way. Like this:Like Loading… Continue Reading