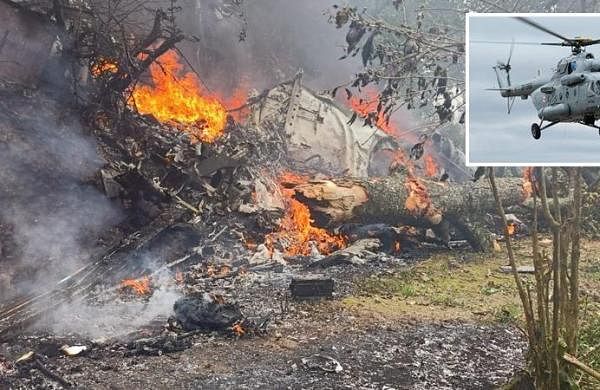 COIMBATORE: As many as eleven bodies have been recovered, according to TN Forest Minister K Ramachandran, after an Army helicopter carrying Chief of Defence Staff General Bipin Rawat crashed near Coonoor in the nearby hilly Nilgiris district on Wednesday.

Ramachandran had earlier told The New Indian Express that on the instruction of Chief Minister MK Stalin he had rushed to the accident spot and was overseeing the rescue operation.

He said 14 persons were in the helicopter but added defence sources have not confirmed other details.

The Minister said the accident took place because of thick mist engulfing the area.

Fire Service personnel as also local people were helping in the rescue operations but as the site of the accident is narrow, they were finding it difficult to move about in large numbers, Ramachandran had said.

Nilgiris district collector SP Amrith too confirmed to The New Indian Express that 14 people including the Chief of Defence Staff Rawat were on board the helicopter that crashed near Coonoor.

The chopper was on its way from the Sulur IAF base to the Defence Services College (DSC) at Wellington when it crashed.

The first Chief of Defence Staff General Bipin Rawat is an alumnus of St. Edward School, Shimla and the National Defence Academy. He assumed office as the Chief of the Army Staff on 31 Dec 2016 and was elevated to his current role on January 1, 2020.

‘Doors are always open’: BJP offers ‘friendship’ to Jayant Chaudhary as it reaches out to Jat leaders