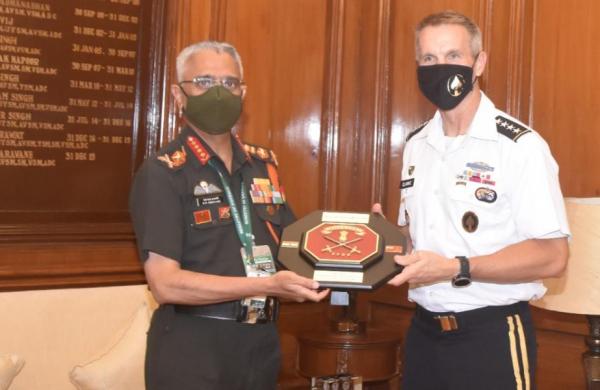 Officials said various dimensions of bilateral defence cooperation, including ways to further deepen it, figured in the talks. It is understood that General Naravane and General Clarke also briefly deliberated on the evolving situation in Afghanistan.

Before meeting General Naravane, the US official laid a wreath at the National War Memorial. “The visit will enhance defence cooperation and military ties between the two nations,” the Army said.

The Indo-US defence ties have been on an upswing in the last few years. In October last year, India and the United States sealed the Basic Exchange and Cooperation Agreement (BECA) to further boost the bilateral defence ties.

The pact provides for sharing of high-end military technology, logistics and geospatial maps between the two countries.

The firming up of the BECA came two years after the two countries signed another pact called COMCASA (Communications Compatibility and Security Agreement) that provides for interoperability between the two militaries and the sale of high-end technology by the US to India.

In June 2016, the US designated India as a “Major Defence Partner”, intending to elevate defence trade and technology sharing with the country to a level commensurate with that of its closest allies and partners.

The two countries had also inked the Logistics Exchange Memorandum of Agreement (LEMOA) in 2016 that allows their militaries to use each other’s bases for repair and replenishment of supplies as well as provides for deeper cooperation.