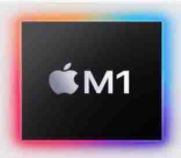 Apple has launched a new MacBook Air with M1 chip in its ‘One More Thing’ event. Apple has claimed that it works 9 times faster than the previous model. The special thing is that to buy this MacBook Air that comes with new hardware, you have to pay almost the same price as the old model. The company has priced it at $ 999, while for education purpose it can be purchased for $ 899. In India, it will be available from November 17 and its price will be Rs 92,900.

Apart from being powerful, there is no fan in the new MacBook Air. The advantage of this is that you will not get any sound while using it. Apple has described its M1 Silicon chip as a very good chip that will give the user a better battery backup while using the MacBook Air.

Refined Retina Display – The company has given a refined retina display in it, which turns on immediately after opening the lid of MacBook Air.

Apart from these, the design of the new MacBook Air has been kept as before. It is very slick to see and in this you get macOS Big Sur operating system. For the sake of information, let us know that all those apps will work in MacBook Air, which do in the model with Intel chip.