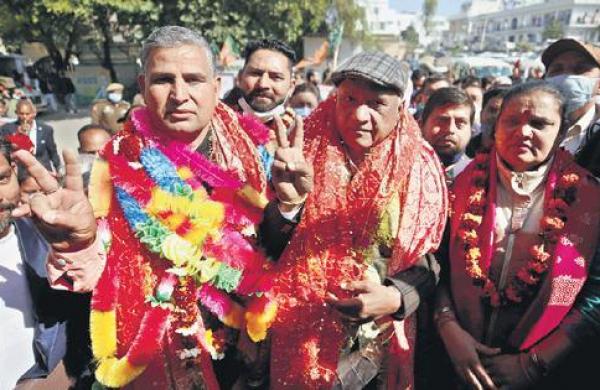 Express News Service
SRINAGAR:  The Apni Party of influential businessman and former PDP leader Altaf Bukhari dealt a severe jolt to the six-party Gupkar Alliance by winning the election of chairman of the all-important Srinagar and Shopian District Development Councils.

The BJP got the chairmanship of the Kathua and Jammu DDCs where the saffron party had won a comfortable majority. Elections for five of the 20 DDCs were held on Saturday. The Apni Party had won only 12 out of 280 DDC seats in J&K.

In the Srinagar DDC, it had won only three of the 14 DDC seats but managed to take its tally to nine after some winning candidates joined the party.

The Apni Party’s Malik Aftab and Bilal Ahmad Bhat were elected as chairman and vice chairman of Srinagar DDC by securing 10 and 9 votes.

The party also snatched Shopian DDC from the Gupkar Alliance despite winning only two seats from the south Kashmir district.

The Gupkar Alliance had won seven seats and could have easily wrested control of Shopian DDC with the help of lone winning Congress member.

The Gupkar Alliance managed to get control of the Kulgam DDC. CPM’s Mohd Afzal Parray and NC’sShazia Jan were elected as chairperson and vice-chairperson.