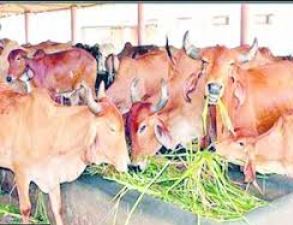 A meeting of the Committee for Prevention of Cruelty to Animals was held in the meeting hall of the district office under the chairmanship of Chairman Chhattisgarh State Cow Service Commission Mahamandaleshwar Rajeshree Dr. Mahant Ram Sundar Das. At the meeting, Mahamandleshwar Rajeshree Dr. Mahant Ram Sundar Das, taking information about the activities of Gau Seva Sansthan, Gausadan and Gothans of the district, said that the state of Chhattisgarh is an agricultural state and animal husbandry along with agriculture is considered an integral part of cow protection. . In the present environment, in addition to agricultural work, animal husbandry is being taken up by the cattle farmers for commercial economic strength. With this, the government has started the commendable work of connecting cattle rearers and villagers in villages with their economic and livelihood usefulness by preserving and better keeping cow cattle in the Gothans. Apart from this, there is a need to make the society’s attitude towards animals living on the roads positive. Since various types of maintenance, transportation, heavy weather-friendly work is being taken in the present environment in the pastures, grazing in the open, roads and other places are generally seen. Which needs to be properly managed.
In the agenda of the meeting, such as the capacity for animal transport and according to the rules of the government, the transportation of animals, the weather – rain at the time of transport of animals, taking special care of the time of transport in winter and summer seasons, according to the capacity in transport on road and Vehicle speed control, publicity of not letting the animals roaming on the road open with the help of cattle rearers, keeping them in the nearest gaushala / gausadan after first aid in case of a road accident, cruelty to animals Monitoring, alerting them – Taking strict vigil on the persons who commit cruelty to animals, they are given proper guidance and action under the Animal Cruelty Act 11960 58A, meat under the Municipality / Nagar Panchayat, organizing fish market and meat testing All the municipalities / nagar panchayat areas of the district included such things as proper administration and health / meat testing after veterinary assistant surgeon and registration of meat, fish business as per the rules of the government on fish market. In the meeting, Goseva president also said that meat is fish. Poultry traders mostly transport impractical tendencies such as birds and animals hanging upside down, which are covered under the Animal Cruelty Act.