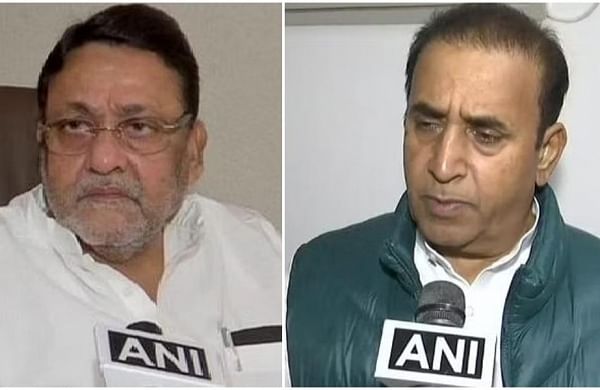 MUMBAI: Jailed NCP legislators Nawab Malik and Anil Deshmukh on Monday approached the Bombay High Court seeking to be released from prison for a day on June 20 to cast their vote in elections to the Maharashtra Legislative Council.

Deshmukh and Malik, both members of the Legislative Assembly, could not cast their vote in the Rajya Sabha elections held on June 10 after a special court refused to release them to take part in the poll process.

The duo has now sought to be released from jail for one day on June 20 to vote in MLC elections.

Deshmukh, a former home minister of Maharashtra, filed an application for one day release from prison in his bail plea submitted earlier this year.

The NCP leader’s application was mentioned by his advocate Inderpal Singh before a single bench of Justice N J Jamadar.

Justice Jamadar posted the matter for hearing on June 15.

The plea of Malik, a sitting cabinet minister, was mentioned before a single bench of Justice Bharati Dangre.

His lawyer Kushal Mor sought permission to get Malik’s plea tagged with Deshmukh’s application and for both the matters to be heard on June 15 by Justice Jamadar.

Malik’s lawyers Taraq Sayed and Kushal Mor had initially sought to amend an earlier petition filed by the state minister challenging a special court order refusing to release him on June 10 for voting in the Rajya Sabha polls.

Sayed told a single bench of Justice P D Naik that the prayers are still the same and that only the date would have to be amended from June 10 to June 20.

Justice Naik, however, noted that the cause of action was different and that Malik’s earlier petition had become infructuous as the elections he wanted to vote in (Rajya Sabha) was over.

You (Malik) will have to file a fresh plea seeking to be released on June 20 for the MLC elections, Justice Naik said, indicating he was not inclined to allow the amendment.

Malik’s lawyers then withdrew the earlier petition and said they would file a fresh one.

Malik was arrested by the Enforcement Directorate (ED) on February 23 this year in connection with a money laundering probe linked to the activities of fugitive underworld don Dawood Ibrahim and his aides.

His party colleague Deshmukh was arrested in November 2021 by the ED on money laundering charges.

The biennial elections for 10 vacant seats of the Upper House of the state Legislature will be held on next Monday.

Members of the state Legislative Assembly constitute the electoral college for these polls.

Eleven candidates are in the fray.

The opposition BJP has fielded five candidates, while the Shiv Sena, the NCP and the Congress, all constituents of the ruling MVA, have given tickets to two nominees each.

Meanwhile, the CBI on Monday submitted before a special court here that it had filed a charge-sheet against Deshmukh and his former aides within the mandated time period of 60 days in a corruption case, and opposed their pleas for default bail.

The central agency submitted an affidavit in the court opposing the pleas of Deshmukh and his former aide and co-accused Sanjeev Palande seeking default bail on the ground that the CBI had filed an “incomplete” charge-sheet in the case.

The pleas had claimed the CBI had not submitted relevant documents along with the charge-sheet and those papers were deposited in the court after the mandated time period.

As per section 173 of the Criminal Procedure Code (CrPC), a charge-sheet in a case ought to be filed within 60 days from arrest of an accused.

If this was not done, then the accused can seek default bail.

The CBI, in its affidavit, said the law mandates completion of investigation within 60 days and that in the present case the report (charge-sheet) was filed by the agency on June 2, 2022, which is within the period of 60 days.

It added that the contention of the accused persons that since the documents accompanying the charge-sheet were not deposited in the court on June 2, 2022, it cannot be termed as a complete charge-sheet is entirely misplaced.

Such misplaced understanding cannot be used/ utilized to seek the benefit of default bail, the CBI said.

The affidavit further said that it was the court that directed the investigating officer to deposit the documents on or before June 7 and hence the accused cannot claim benefit under section 167(2) of the CrPC (accused can seek default bail if charge-sheet is not filed within 60 days).

The CBI had last week filed a 59-page charge-sheet against NCP leader Deshmukh and his two former aides  Sanjeev Palande and Kundan Shinde  in the case related to alleged corruption and misuse of office.

Former Mumbai police commissioner Param Bir Singh in March last year alleged that Deshmukh, the then-state home minister, had given a target to police officers to collect Rs 100 crore per month from restaurants and bars in the city.

Deshmukh denied the allegations, but stepped down from his ministerial post after the Bombay High Court directed the CBI to register a case against him.

The 72-year-old politician is currently in jail under judicial custody in a money laundering case being probed by the Enforcement Directorate (ED).