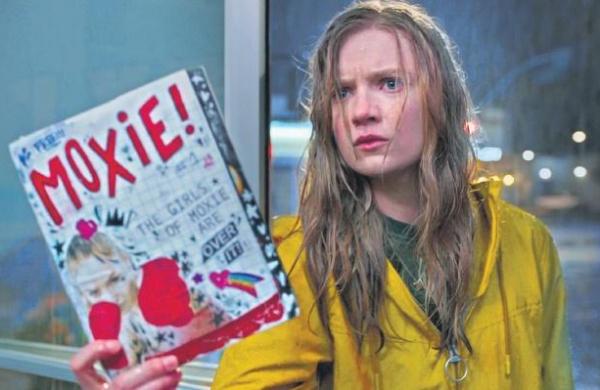 Express News Service
March is usually a chaotic month for women, one in which the world, around Women’s Day, seems to awaken from its slumber to acknowledge once again that women exist. Mostly, it is for our purchasing power, with a barrage of campaigns targeting women with money. For this single day, women are celebrated, and their problems, recognized. Social media gets a decorative makeover.  And then, we go back to regular programming. We are expected to keep our heads low and shrink away from visibility. Rape threats and harassment occur because we are ‘asking for it’. When we are assertive, we are ‘bossy’; when we ask questions, we are being ‘difficult’.

Being dubbed ‘difficult’ or a ‘killjoy’, is a rite of passage, mine anyway, to discovering feminism. I struggled with it and continue to fight it. It is the easiest way to make one feel like they don’t deserve the space they occupy. This emotional scuffle is central to Amy Poehler’s high-school feminist drama Moxie, adapted to the screen from the book of the same name. It makes sense that the story is set in high school because, for a lot of us, it is when we discover the double standards. We realise our bodies are being treated differently, that we have different rules and are being censored, that we are held accountable for things we aren’t responsible for.

One of the girls in this film gets sent home for wearing a tank top. Girl students are ranked from ‘most bangable’ to ‘best rack’, and no one, not even the girls, bats an eyelid. The school administration shrugs it off as ‘social media stuff’. When Lucy (Alycia Pascual-Peña), a new student at Rockport, gets harassed by the ‘popular football captain’ Mitchell Wilson, the school principal asks her to ‘sort it out’.

Moxie does have a ‘been-there done-that’ feeling, but the energy is infectious (the word, Moxie, means courage and energy). Vivian starts Moxie, a feminist club, after being inspired by the tenacity of her new black friend, Lucy. She then discovers about her mom’s tryst with protests and feminism. And like we all do at some point, she wonders how things are still the same.

What I loved about Moxie is that it tries to be intersectional: even though Vivian starts the group, it is Lucy who pushes the idea forward and makes it formidable. There’s a lovely conversation between Vivian and Claudia, her Asian best friend, about how different they are, and how the latter’s race makes it harder for her to take the risks Vivian is able to. There’s also a differently-abled person who does her part for the cause, like just another person. It reminded me of the utility of differently-abled characters being shown as normal supporting characters, without focus drawn towards why they are different. If that isn’t #inclusivity…

Moxie also checks another box by arguing that feminism isn’t just for women. Instead of glamorizing the conventionally attractive Mitchell, the film roots for the more sensitive Seth who doesn’t think twice before supporting the girls. In the real world, he would be called a ‘simp’, or ‘not man enough’. But that is patriarchy’s biggest achievement, isn’t it? To turn sensitivity, inclusivity, and humanity into something that needs to be mocked.

In a teenage drama, the scene of an emotional breakdown is usual. But Vivian’s breakdown feels infinitely personal in Moxie. There’s a lot of rage and angst a woman feels when she begins to understand the ways of patriarchy. You begin to look at the world differently, and it makes you question everything. And boy, can it get exhausting to be angry all the time… All the pent-up frustration can occasionally gather to lash out at even those who mean well. As you grow up though, you learn to simmer, not boil. It is all part of owning the space we occupy, without budging and slinking into the darkness. And we are allowed our mistakes too. Isn’t it better to try with honesty and err, than to not do anything?

Moxie has no room for subtlety. It is loud and relentless, and the messaging is on the nose. And why not, because it’s 2021 and yet, women continue to get asked sexist questions. Their make-up costs come for criticism, not their work. So, there is a need to be loud, to claim the space we rightfully own. We deserve a seat at the table too, and not just for one day. If that is being ‘difficult’, then so be it.