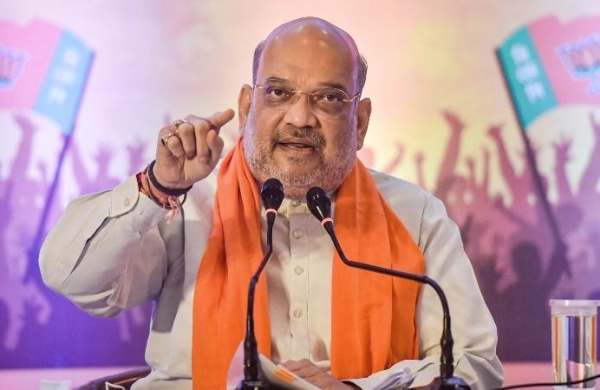 By PTI
SHILLONG: Union Home Minister Amit Shah is arriving here on two days visit Saturday to chair a meeting with the Chief Ministers of eight Northeastern states in which interstate border issues might be taken up, officials said.

In addition, Shah has some official engagements in Meghalaya during his stay.

Officials said Friday that Shah will be chairing a closed-door meeting with the CMs, Chief Secretaries and police chiefs of all the NE states on Saturday, where among other issues, the chief ministers are likely to discuss the interstate boundary issues plaguing the region.

Giving detail of Shah’s program, the officials said he will inaugurate the Inter-State Bus Terminus (ISBT) at Mawiong in the outskirts of Shillong and the Cryogenic Plant at the New Shillong Township.

The union minister is also scheduled to visit Sohra (erstwhile Cherrapunji) on Sunday to inaugurate an afforestation project, to inaugurate the Greater Sohra Water Supply Scheme and he is scheduled to pay a visit to the Ramakrishna Mission Ashram there.

Sohra is about 65 km South of Shillong and on a clear sunny day, one can get a full view of the plains of Bangladesh.

The home minister has scheduled a 30 minutes meeting with the leaders of civil organisations where he is expected to give a patient hearing to their grievances, a senior official said.

The organisations are all prepared to apprise the union home minister on various issues of the state which included the need to implement the inner Llne permit (ILP), inter-state border disputes, inclusion of Khasi language in the Eighth Schedule and amendment to the Sixth Schedule of the Constitution of India, sources close to the organisations said.

Security has been beefed up here ahead of the visit of the union home minister, officials said.

Police and paramilitary forces have been directed to stay alert, keep a strict vigil and intensify patrolling in the city, especially in the vicinity of the venue and the roads leading to the ISBT and New Shillong Township as Shah is scheduled to inaugurate both the projects, they said.

A mock drill to facilitate smooth movement of the union minister cavalcade from the helipad to the venue was also undertaken since Thursday as part of the security arrangements.

All markets and business establishments here have been ordered shut on Saturday and Sunday by the district administration despite the lockdown being relaxed to avoid any law and order issues, a senior home department official told PTI.

He said all necessary measures are being done in coordination with the state police, central agencies, and the paramilitary forces in all the places the minister is scheduled to visit during his two day-visit to the state beginning Saturday.