Amit Shah slams Congress for cosying up to minority-based parties 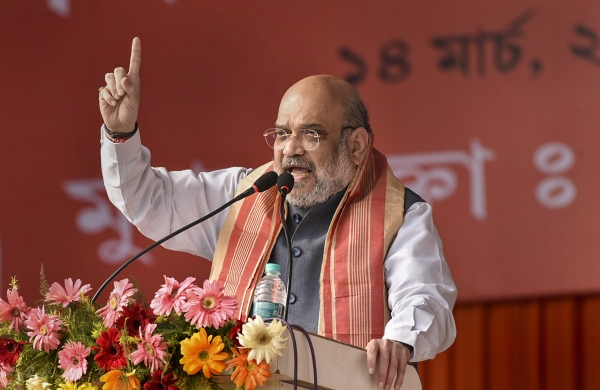 Express News Service
GUWAHATI: Pillorying the Congress for aligning with some minority-based parties in Assam, West Bengal and Kerala, Union Home Minister Amit Shah on Sunday said the grand old party could go to any length to win elections.

“In Kerala, the Congress has aligned with the (Indian Union) Muslim League that worked to divide the country. In Assam, it has aligned with the AIUDF (All India United Democratic Front). Similarly in West Bengal, it has forged an alliance with a party floated recently by a cleric of Furfura Sharif Dargah. The Congress can go to any length to win elections,” Shah said addressing a rally at Margherita in poll-bound Assam.

He went hammer and tongs at the Congress for its tie-up with the AIUDF, which is headed by Lok Sabha member Maulana Badruddin Ajmal. Many in Assam view the AIUDF as the protector of illegal immigrants. Congress and AIUDF are components of an eight-party grand alliance of Opposition. It was formed with the sole aim to oust the BJP from power.

“The elections are just days away and there are two options before you. One is the Modi and Sonowal-led combine of BJP-AGP (Asom Gana Parishad). The other is the Rahul Gandhi-led Congress-Ajmal combine. Tell me who can do well for Assam. This election will determine Assam’s future,” Shah said addressing the crowd.

Continuing his attack, he said the Congress would go to people, talk about communities and make them fight, which is its policy. But the BJP believes in “sabka saath, sabka vikash, sabka vishwas”.

“Tell me what you want – violence or peace, gun or employment, infiltration or development? Can Rahul, with Ajmal seated on his shoulders, thwart infiltration? If you vote for the Congress, it will go to Ajmal…

“I want to make a promise to the people of Assam. Give us five more years. Infiltration will become a thing of the past,” Shah asserted.

Talking about the BJP’s commitment, he said land at the one-horned rhino fame Kaziranga National Park and the Satras (Vaishnavite prayer centres), encroached upon by the “infiltrators”, was cleared by the state’s BJP-led government.

“Could the Congress do it? Did it want to do it? No, their eyes are always fixed on the votes of infiltrators (immigrants). The BJP does not do vote-bank politics,” Shah said.

He slammed Congress also for remembering the tea workers during elections. He asked the party what it did for the workers when it was in power in Assam for 15 years and at the Centre for 10 years. Congress has promised a daily wage of Rs 365 if voted to power. Currently, it is Rs 167.

Shah reiterated the commitment that the BJP would make Assam flood-free if it retains power. He said the entire state has been already surveyed through satellite imageries and a design prepared to divert the floodwater to canals, reservoirs etc.