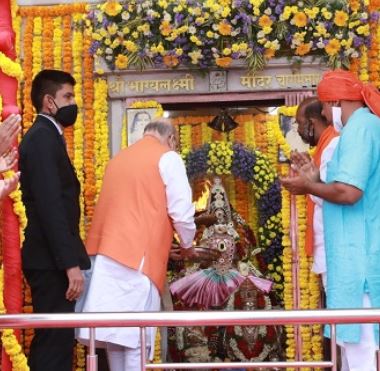 On his arrival, Shah was given a warm welcome by BJP leaders. Later, the Union Home Minister visited the Bhagyalakshmi Temple in Old City, Hyderabad to offer prayers ahead of the campaign.Shah will be addressing public programs today in Telangana and he is also scheduled to attend a roadshow in Secunderabad.

On Saturday, BJP national spokesperson Sambit Patra and Uttar Pradesh Chief Minister also visited Hyderabad ahead of the polls. BJP president Jagat Prakash Nadda had held a road-show here on Friday. The top brass in the BJP are campaigning for the GHMC polls.

Voting will be held in 150 wards in the GHMC polls on December 1 and the results will be declared on December 4. In the last GHMC election, the Telangana Rashtra Samithi won in 99 wards. AIMIM bagged 44, with the remaining seven wards won by other parties and Independents.