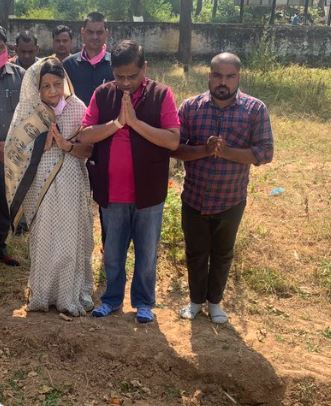 After the results of Marwahi Assembly by-election in favor of Congress, Janata Congress Chhattisgarh state president Amit Jogi reached the tomb of his father Ajit Jogi. Amit was accompanied by his mother Kota MLA Renu Jogi. Amit said that this morning, in the tomb of his late father Ajit Jogi, today with his mother, he came to seek his blessings and inspiration from his life. I have inherited a struggle from my father

Amit said that no matter how tough the challenge, I will face it. Neither will I bow nor will I get tired. I will continue till my last breath on their path. After the nomination was canceled in Marwahi by-election, Amit Jogi appealed for a vote in favor of BJP. However, the people of Marwahi have given their support in favor of Congress candidate KK Dhruv. Earlier, State Congress President Mohan Markam congratulated the workers on the victory of Marwahi. Mercam tweeted – This victory is dedicated to all the hardworking workers of Congress, who worked hard and united themselves day and night.

Markam said that the people of Marwahi have expressed their full confidence in the programs of Congress national president Sonia Gandhi, former national president Rahul Gandhi, state in-charge PL Punia and good governance of Chief Minister Bhupesh Baghel. Minister TS Singhdev said that many congratulations to Dr. KK Dhruv on his spectacular victory in Marwahi by-election. The people gave their trust and blessings to the Congress and further strengthened the progressive politics in the state. Thanks to the people of Chhattisgarh for this.