Amid reports of infighting ahead of Bengal polls, defectors to get BJP ticket 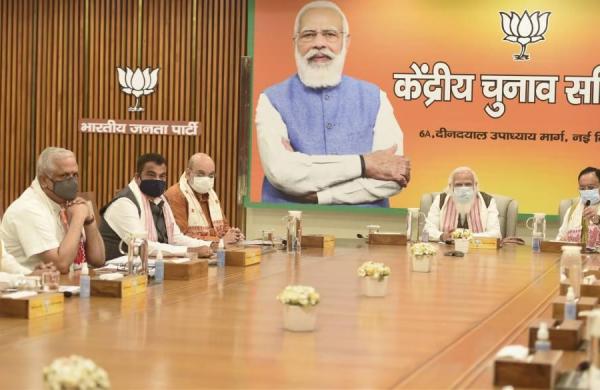 Express News Service
NEW DELHI:  The BJP on Thursday is learnt to have finalised candidates for the first few phases of Assembly elections in Assam and West Bengal, with fresh faces in the former and turncoats in the latter getting preference.

The central election committee (CEC) of the BJP met on Thursday to approve the list of candidates, screened by the respective poll-bound state units of the party. The final lists are likely to be released in the next few days.

Apparently to ward off faction fighting, the BJP is not likely to field any of the Lok Sabha MPs, as also West Bengal unit chief Dilip Ghosh, in the Assembly elections.

The party is also struggling to keep its house in order, as old-timers and new entrants engage in feud over multiple issues, including ticket distribution.

The saffron party, which had witnessed unprecedented growth in terms of vote share and mass base over the last few years, left its doors wide open for leaders from other parties, as part of its poll strategy, but that did not go down well with many senior leaders, who had once locked horns with the newbies from rival camps, sources in the BJP said.

The possibility of naming a chief ministerial candidate for West bengal, too, is remote.  But the BJP CEC is learnt to have given the go-ahead to the party’s bid to reward the defectors from the ranks of the ruling Trinamool Congress, which includes the likes of Suvendu Adhikari, Rajeeb Banerjee, Dipak Kumar Haldar.

According to a senior BJP leader, the strategy had initially reaped dividends for the saffron camp, which labelled the TMC as a “sinking ship”, but it eventually led to infighting within the organisation and diluted the party’s “fight against corruption”, as several new entrants were found to have graft charges against them.

The party recently did a course correction, and stopped the mass induction, but the damage by then was done, with the leadership now having to face the “herculean task” of identifying suitable candidates from 8,000 aspirants for the state’s 294 constituencies, the senior leader said.

“We never thought that induction of leaders from other parties could lead to such a situation. Every day we hear reports of infighting between the old-timers and newcomers. We apprehend that post announcement of names (of contenders), discontentment within the camp will grow further,” the BJP leader noted.

State BJP chief Dilip Ghosh, however, insisted that expanding the party’s base was necessary at this juncture.

“The BJP is a big family. When your family grows, such incidents do take place. If we don’t take people from other outfits, how will we grow? That said, everyone has to abide by the rules and regulations of the party. No one is above the party,” Ghosh said.

Elections in Bengal, poised to be a stiff contest between the TMC and the BJP, will be held in eight phases, beginning with polling for 30 seats on March 27.

According to the saffron camp sources, many state leaders and the RSS — the BJP’s ideological parent – have aired their displeasure over induction of certain leaders from other parties.

Thousands of activists from rival parties joined the saffron camp in the last few months during the ‘jogdan mela’ (joining programme) in various districts of the state.

As many as 28 MLAs, including 19 from the TMC, and a sitting MP of the ruling camp have switched over to the BJP over the past few months.

Prominent among them are heavyweight politicians and former TMC leaders Suvendu Adhikari and Rajib Banerjee, Sovan Chatterjee and Jitendra Tiwari.

Discontentment in the saffron camp, which had been brewing for a while, first surfaced in September last year, when veteran leader Rahul Sinha was replaced by Anupam Hazra, a former TMC MP, as national secretary.

Sinha openly spoke about the “injustice meted out to him to make space for leaders from the TMC”.

The state BJP leadership had then issued show-cause notices to Basu and Paul for speaking on the issue in public.

Tiwari was taken into the saffron fold earlier this week.

In certain pockets, BJP supporters have also come up with posters, which stated that local leaders would prefer backing an Independent candidate to supporting “parachuted leaders from the TMC”.

“Old-timers are worried that new entrants from the TMC would hog all the limelight and the efforts put in by them to strengthen the party would go in vain.

They are apprehensive that they might not get due recognition, and tickets could slip out of hand,” another senior state BJP leader said.

“In East Midnapore, there are 16 seats. Adhikari might pitch for his loyalists who have followed in his footsteps and joined the BJP. The same could happen in Howrah, where Rajib Banerjee wields considerable influence.”

“If you accommodate them, old-timers will get angry; if you don’t, the loyalists will get infuriated. It’s a precarious situation,” the BJP leader said.

Political analysts feel that a lack of strong leadership and over-dependence on central leadership might put the saffron party at a disadvantage.

“Once the candidate list is out, it will lead to massive infighting. If the BJP fails to control this situation, it will be Achilles heels for the saffron camp,” political analyst Biswanath Chakraborty asserted Echoing him, another political pundit, Suman Bhattacharya, said induction of “tainted leaders” from the TMC has diluted the BJP’s main poll plank – ‘fight against corruption’.

“The BJP, which had been levelling corruption allegations against TMC leaders, ended up welcoming some of them into the party. This has put a question mark on the BJP’s credibility as an alternative to the TMC,” he added.

The TMC leadership — at the receiving end of the exodus — contended that only “rotten elements” have left the party to join the BJP.

“The saffron camp has turned into a dustbin of the TMC. It is good riddance for us,” TMC secretary-general Partha Chatterjee said.

The opposition CPI(M) claimed that the switchovers only go on to prove that the BJP and the TMC are “two sides of the same coin”.

Making light of the claims, BJP national general secretary Kailash Vijayvargiya said the BJP is the largest party in the country, and knows well how to tackle such “minor issues”.

“People of Bengal have made up their mind to oust the TMC. These instances (of infighting) are minor hiccups, and we know how to tackle it. It won’t be an issue in the long run,” he said.

The BJP will also be fielding actors and actresses in the state, sources said, adding that since it had won just three Assembly seats in the 2016 polls, there’s ample scope to strike a fine balance between the new entrants from other parties and their own cadre.

In Assam, the BJP is particularly looking to draft in fresh blood to beat anti-incumbency against the Sarbanada Sonowal-led NDA government, with special thrust on educational qualifications and “innovative leadership” skill sets.

Assam Chief Minister Sarbananda Sonowal, state minister Himanta Biswa Sarma, and leaders from the West Bengal party’s unit were among those who attended the meeting.

“Special focus in the choice of candidates is on the educational qualifications and innovative leadership skills to execute the vision of the prime minister to connect the initiatives of the government with the people,” said a senior BJP functionary.

Also, potential candidates who have the ability to take the party forward in the next decade, too, will get picked, the functionary added,

For Tamil Nadu, the party is likely to wait for the formal announcement of seat adjustments with allies before it releases its list of candidates.

“In Kerala and Tamil Nadu, the BJP will give ample scope to professionals with credible public achievements besides the committed cadre in the candidate selection, while the turncoats from the Congress will get the ticket in Puducherry,” sources stated.

With the former “Metro Man” E Sreedharan in the saddle, the BJP is likely to experiment in candidate selection to gain popular attention in Kerala to further its aim to emerge as the third force in the state.