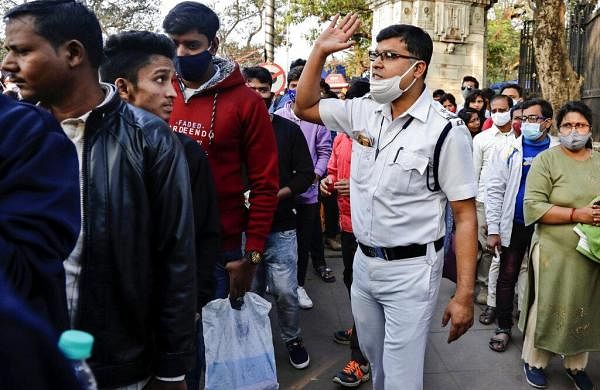 KOLKATA: The number of active COVID-19 cases in West Bengal breached the 1-lakh mark on Tuesday as 21,098 more people tested positive for the infection, 1,812 more than the previous day, taking the state’s caseload to 17,95,430, a health bulletin said.

Nineteen fresh fatalities pushed the death toll to 19,936, with Kolkata reporting six of the mortalities.

The eastern metropolis registered 6,565 infections, 1,009 more than the previous day, while its neighbouring North 24 Parganas recorded 4,016 cases, it said, adding that the positivity rate improved to 32.35 per cent from 37.32 per cent on the previous day.

A total of 16,73,258 patients have recovered from the disease so far, including 8,037 in the last 24 hours, the bulletin said, adding that the discharge rate marginally dipped to 93.20 per cent.

Meanwhile, the West Bengal government has decided to write to the Centre over the issue of CoWIN application showing a lesser number of people who have received the second COVID vaccine dose in the state than the actual count.

“The state health secretary, as per direction of Chief Secretary H K Dwivedi, will write to the Union Health Ministry urging the Centre to close the gap,” a well-placed government source said.

Health experts warned once again that allowing the Gangasagar Mela, a religious gathering in Sagar islands, at a time when the country is in the throes of a third Covid-19 wave could turn out to be a super -spreader ‘incident.

Experts warned that the Mela, akin to the Kumbh Mela held at Haridwar and Prayag among other places, which is slated to attract several lakhs of people could transform into a “hot source of transmission of the coronavirus”.

“It (Gangasagar Mela) will definitely be a super-spreader. There is no doubt of that. Lakhs of people will congregate and we fear there will be violation of Covid-19 safety protocol.”

“This will definitely boost the transmissibility of the virus. This Mela will definitely be a hot source of transmission (of the coronavirus). The number of daily cases will be much more than what we are seeing now,” Dr Anima Halder principal of State -run Infectious Diseases and Beliaghata General (ID&BG) Hospital told PTI.

In the last seven days, the state has witnessed a massive surge in Covid-19 infections with the positivity rate shooting to 37 per cent.

West Bengal reported over 24,287 infections on Sunday, the highest since the pandemic began.

Halder pointed out that the Mela will give an opportunity to asymptomatic infected people to “mix with those yet not infected” in large numbers and that could help the virus spread in geometric progression.

A doctors’ forum had filed a writ petition before the Calcutta High Court seeking a ban on the gathering.

The petitioners had sought a direction to the state government not to hold the annual Gangasagar mela scheduled for January 8 to January 16 on the occasion of Makar Sankranti at Sagar Island, situated about 130 kms from Kolkata.

However, the High Court allowed the Mela to proceed on assurances from the state government that it would take steps to enforce Covid protocols and after ordering that the island be declared a notified areas, a committee be set up to monitor the measures taken, and to ensure that only double vaccinated people who have had RT-PCR Covid tests done 72 hours before reaching Sagar are allowed.

Echoing Dr Halder’s apprehensions, Dr Hiralal Konar, one of the conveners of the West Bengal Joint Platform of Doctors, said that there is a very strong possibility of the situation going out of hand and warned the healthcare infrastructure would be severely challenged if that happens.

“Though, we know that the Omicron variant is not as fatal as previous strains, the rate of transmissibility will definitely cause havoc after the congregation has taken place at Sagar Island. This will definitely be a severe challenge to the health infrastructure,” Dr Konar told PTI.

Dr Shanta Dutta, director of the National Institute of Cholera and Enteric Diseases, also reiterated the same fear stating that controlling people and making them follow safety protocols is a tough task in such a big gathering.

“Distancing while taking the dip? That will not be possible. So, it will definitely pave the way for the virus to transmit more and more,” Dr Dutta told PTI.

When contacted, Dr Subhrojyoti Bhowmick, Clinical Director, Academics and Research, Peerless Hospital, said, “Yes, I believe that gatherings like Gangasagar Mela are super spreaders and will add fuel to the fire of Covid19 surge. It is clear that Omicron can infect double dose vaccinated people in the country.”

In view of the surge in Covid-19 cases, organizers of Tata Steel Kolkata Literary Meet have postponed the festival earlier slated to be held on the lawns of Victoria Memorial from January 25.

A spokesman for the literary festival said Tuesday, that the on-ground festival will be held when the situation comes under control.

However, some online sessions will be held on scheduled dates “to mark the city’s annual date with literature and the arts.

Tata Steel Kolkata Literary Meet in association with Victoria Memorial Hall, is one of the highlights of the annual literary calendar not just in Kolkata, but for the country.

Director of the Tata Steel Kolkata Literary Meet, Malavika Banerjee said “our meet has traditionally been an open air celebration of great books, ideas, works of arts in various forms and great speakers. The present situation makes it difficult to host it in that form.”

She said there will be online sessions, featuring 2021 Booker winner Damon Galgut, Indra Nooyi and festival favorite Andre Aciman “to mark our dates in January”.

But the festival authorities will be looking for an appropriate time, probably the last weekend of March depending on the situation then, to host the event on the ground, she said.

Vice President, Corporate Services, Tata Steel Chanakya Chaudhary added while we were looking forward to the Tata Steel Kolkata Literary Meet in partnership with the Victoria Memorial Hall, we are postponing this year’s edition in the interest of public safety.