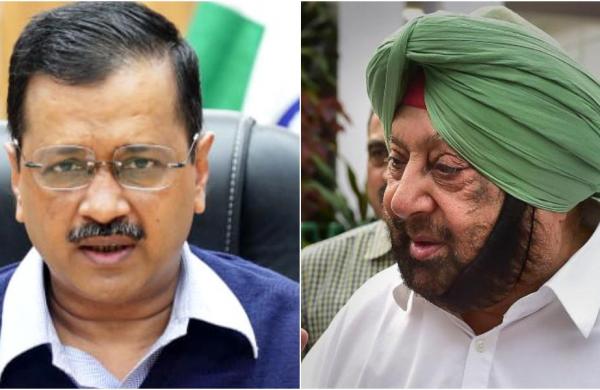 By PTI
CHANDIGARH: Chief Minister Amarinder Singh on Monday trashed his Delhi counterpart Arvind Kejriwal’s allegation that the Congress government in Punjab had failed to fulfil its poll promises.

Kejriwal had on Sunday slammed the Amarinder Singh-led government in Punjab, alleging “not even a single promise had been honoured” in the last four years and asked people to “take a revenge” in the 2022 assembly polls for “deceiving” them.

“If this is the Delhi model you (Kejriwal) are promising for Punjab, then my people are better off without it,” he said in a statement.

“Instead of indulging in deceitful claims and talking of ‘badla’ (revenge), Kejriwal should focus on Delhi, which is still waiting for him to fulfil even 50 per cent of his poll promises,” Singh remarked.

Stating that his party had kept each promise made with the residents of Delhi and provided 24-hours power supply with zero bill and improved health and education services, Kejriwal had asked if these were possible in the national capital then why cannot in Punjab.

Kejriwal had addressed a ‘Kisan Maha Sammelan’ organised by the Aam Aadmi Party at Punjab’s Moga district on Sunday.

Singh slammed the AAP leader’s “shameless lies as a re-run of the spree of false promises and cheap attacks on the Congress he had resorted to back in the 2017 polls”.

“Kejriwal’s barefaced lies will be exposed again, just as they had been exposed in the 2017 Assembly polls,” he said, adding that “Punjab knows what a first-rate liar and master of deceit you (Kejriwal) are”.

Data available in the public domain shows the AAP’s wretched credentials when it comes to delivering on its promises, alleged the Punjab chief minister, pointing to what he called a plethora of independent analyses ahead of the 2020 Delhi Assembly polls, which had showed that at the end of its five-year term, the Kejriwal government had fulfilled “only 11 of its 70 promises”.

“It is a matter of record that despite Delhi Congress leader Ajay Maken’s repeated questioning on the issue, the AAP government in Delhi had failed to show its progress on its eight-lakh jobs’ promise of 2015.

“Even the much-touted Delhi Skill Mission had failed to take off,” Singh pointed out, adding that “as per figures listed in one of the analysis, the Kejriwal government had given jobs to 102 people in 2016, 66 people in 2017, and 46 people until April 2018”.

“You really have no shame if you can come and criticise my government’s employment record with such data on Delhi,” he added.

In contrast to the AAP government in Delhi, Singh said the Congress government in Punjab had provided 16.29 lakh jobs/self-employment opportunities under the ‘Ghar Ghar Rozgar Mission’, with 58,709 in the government sector alone.

He said during the last year of its current term, the Punjab government would be recruiting another one lakh people to fill existing vacancies in government jobs.

Citing survey of the government of India and its agencies, Singh pointed out that as per the report on the Periodic Labour Force Survey (2018-19) released by the Ministry of Statistics and Programme Implementation, as against Delhi’s unemployment rate of 8.0 per cent, Punjab had 7.2 per cent unemployment, which was even lower than the national average.

“Apparently, your Punjab leaders, as always, failed to give you correct inputs before you came to Punjab, or perhaps they deliberately misled you,” the chief minister said, taking a dig at Kejriwal over his promises to the people of the state.

Singh also did not spare Kejriwal over his “will always stand shoulder-to-shoulder with the farmers protesting against the Centre’s three farm laws” comment.

“Everyone knows who you are standing with on this issue,” quipped the chief minister, reminding the AAP leader that his government in Delhi had already implemented one of the farm laws.

“Even in Punjab, the AAP had taken a U-turn on the issue,” he pointed out, asking the Delhi chief minister to “stop poking his nose in his state’s affairs, which he is capable of handling much better than he (Kejriwal) is doing in the national capital”.