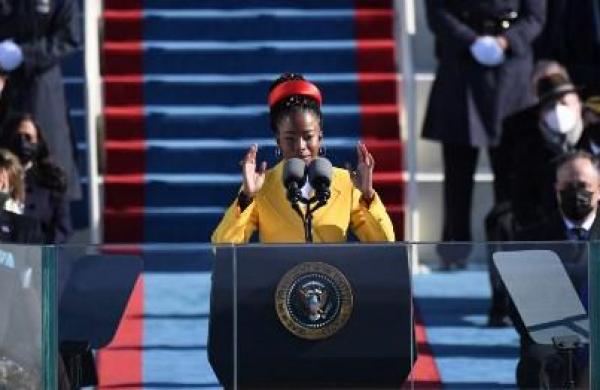 By ANI
WASHINGTON:  American poet-activist Amanda Gorman, who grabbed many eyeballs when she recited her poem ‘The Hill We Climb’ at US President Joe Biden’s inauguration ceremony, honoured the COVID-19 heroes in a moving performance at Super Bowl LV in Tampa, Florida.

As per E! News, this year, the NFL (National Football League) chose three Super Bowl captains who have made an impact on their communities amid the pandemic by helping their community and beyond during a very difficult year.

The National Youth Poet Laureate recited a poem honouring them, titled ‘Chorus of the Captains’ into a 1950s-era microphone while pensive yet triumphant music played. Gorman with her performance became the first poet to ever perform at the Super Bowl.

Poetry at the Super Bowl is a feat for art & our country, because it means we’re thinking imaginatively about human connection even when we feel siloed. I’ll honor 3 heroes who exemplify the best of this effort. Here’s to them, to poetry, & to a #SuperBowl like no other
— Amanda Gorman (@TheAmandaGorman) February 7, 2021

On Sunday, she appeared during a pre-taped portion at the Super Bowl in a glam blue coat by Moschino to recite her poem. During the moving performance, Gorman shined the spotlight on three everyday heroes as footage of them in their respective elements played.

Gorman honoured James Martin, a veteran who works with the Wounded Warrior Project and has live-streamed football games for his community, Trimaine Davis, a Los Angeles teacher who has provided tech workshops to kids to help them with remote learning and Suzie Dorner, an ICU nurse manager at Tampa Bay General Hospital.

“Today, we honour our three captains for their actions and impact in a time of uncertainty and need. They have taken the lead, exceeding all expectations and limitations, uplifting their communities and neighbors as leaders, healers, and educators,” Gorman said in her poem.

“Let us walk with these warriors, charge on with these champions and carry forth the call of our captains. We celebrate them by acting with courage and compassion, by doing what is right and just, for while we honour them today, it is they who everyday honour us,” Gorman said of the heroes.

The 22-year-old poet had performed at Biden’s swearing-in ceremony last month, making her the youngest poet to ever do so. She read the poem titled ‘The Hill We Climb’, which touched on themes of hope and unity. In less than 24 hours, Gorman gained millions of followers on social media and signed to IMG models soon after.