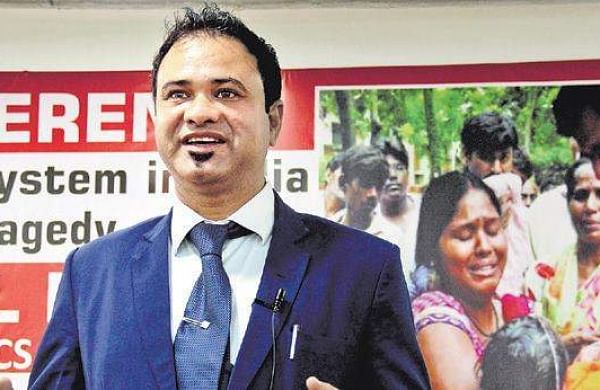 Express News Service
LUCKNOW: The Allahabad High Court, on Monday, asked the Uttar Pradesh government as to why Dr Kafeel Ahmad Khan of BRD medical College, Gorakhpur, is on suspension for the last four years. The court directed the Uttar Pradesh government to file a reply in connection with a writ petition filed by Dr Kafeel Ahmad Khan by August 5.

Dr Khan had filed the writ petition challenging his suspension from BRD Medical College, Gorakhpur on August 22, 2017 following the death of around 60 children within a span of 2-3 days due to the lack of oxygen supply.

Hearing Dr Kafeel’s petition, Justice Yashwant Varma, on July 29 had directed the court authorities to list the matter on August 5 for the next hearing. In the present writ petition, petitioner Dr Kafeel Khan has challenged his suspension.

Earlier, the petitioner had approached the High Court by filing a writ (no-3511 of 2019) on the ground that although he had been suspended way back in the year 2017, yet the inquiry proceedings had not been concluded till the filing of that petition.

Acting on this writ petition, the court, by an order dated March 7, 2019, disposed the writ petition with a direction to the respondents to conclude the enquiry within three months. In the wake of the High Court order, the enquiry officer probing into the charges against Dr Kafeel Khan submitted his report on April 15, 2019. Thereafter, the disciplinary authority chose to pass the order after almost 11 months.

Taking note of this, the court observed, “The delay in taking further action on the part of the disciplinary authority is not explained. The respondents are also obliged to justify the continuance of the order of suspension which has continued for more than four years”.

The petitioner also mentioned in his plea that as many as eight persons were suspended along with him in this oxygen shortage case but all of them had been reinstated except the petitioner.