All is not well in Congress? Azad rapped for hailing PM, poking at Gandhis 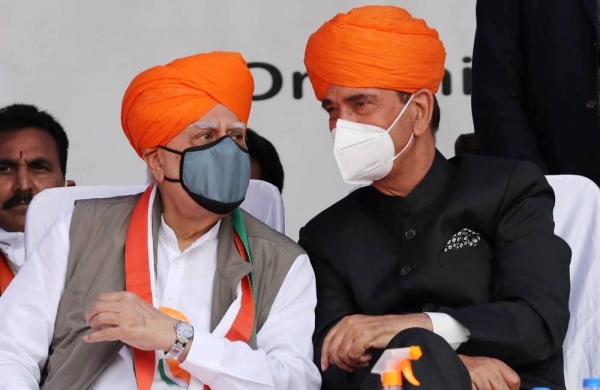 By Express News Service
SRINAGAR/NEW DELHI:  A day after the G23 dissenters observed that the Congress was getting weaker, veteran party leader Ghulam Nabi Azad on Sunday praised Prime Minister Narendra Modi for staying true to his roots while indirectly questioning the way the Gandhis function.

On his first visit to Jammu and Kashmir after his Rajya Sabha term ended on February 15, Azad said: “I appreciate that he (Modi) does not hide his true self. Those who do so are living in a bubble. I like a lot of things about many leaders. I am from a village and I am very proud of it. Politically, we are opposed to him but at least he does not hide his true (self) reality. We all should be proud of our roots.”

However, his comments did not go down well with some party leaders, who countered it was the Modi-led Centre that abrogated Article 370 and made the state a Union Territory after carving out Ladakh.

The Congress veteran’s comments came in for criticism even in Tamil Nadu. Party’s Karur MP Jothimani tweeted: “Dear Gulam Nabi Azad Ji you can praise Modi Ji as much as you want. But please remember he tore Kashmir into pieces. This is the state and its people who made what you been for decades along with Congress,” tweeted Congress MP from Tamil Nadu Jothimani.

Meanwhile, addressing a function organised by Gurjar Desh Charitable Trust in Jammu, Azad said: “I have traveled to over 100 countries and lived in five and seven-star hotels. But when I sit among the people of my village, I love it. Even if the clothes of people of my village are not so clean, it has a different fragrance and it is unmatched,” he added.

On February 15, an emotional PM Modi had given a tearful farewell to Azad from the Upper House, saying: “I worry that whosoever will take over from Azad will have to fill very big shoes because he cared not only about his party but also the country and the House. This is not a small thing.” The teary-eyed farewell from Modi had led to speculation that Azad may defect to the BJP.

Azad belongs to the group of 23 Congress leaders, who had written to Sonia Gandhi, seeking an organisational overhaul of the party and a leadership change. The group had met in Jammu on Saturday and said the party had weakened in the past decade and there was an urgent need to strengthen it.

party’s Punjab unit chief Sunil Jakhar hitting out at ‘G-23′ dissident leaders and asking them to shun the “politics of opportunism”.

In a statement, the Punjab Pradesh Congress Committee (PPCC) president referred to remarks of party leaders Kapil Sibal, Ghulam Nabi Azad, Raj Babbar, and Anand Sharma, made at a public event in Jammu on Saturday, and said those opposing reforms in the organisation were doing a great disservice not only to the party but also to the country.

“Come and join me in the protest which would be a refresher course for you all in raising the voice for the people we serve far away from the cozy environs of Rajya Sabha galleries,” Jakhar said, referring to the Punjab Congress’ planned march to “gherao the Punjab Raj Bhavan against the spiraling prices of essential commodities”.

He said some senior party leaders were “indulging in politics of opportunities” that too at a time when every Congress worker is fighting the grave battle to save and preserve the idea of India “under assault from oppressive central regime”.

Jakhar said the country needs Congress to engage in politics of struggle to raise the voice of the common man on the street and urged these leaders to take up issues of the public.

The leaders are part of the dissident group which was given the moniker of G-23 after it wrote to party chief Sonia Gandhi last year demanding an organisational overhaul and internal elections for all posts in the Congress.

Coming together on one stage, several of these leaders had on Saturday said that the Congress has weakened and they have taken it upon themselves to strengthen it.

Reacting to it, the party had said that these leaders should join the Congress’ campaign in poll-bound states and strengthen it, instead of becoming active against each other.

“Those raising their voice against reforms in an organisation which gave them the most potent platform to evolve as leaders, they are today are doing a great disservice not only to the party but also to the country,” Jakhar said.

Disagreeing with Raj Babbar’s reported “Hum hi Congress hain” comment, Jakhar underlined the “Congress party is older than you and me” and its core philosophy has consistently been of public service only.

“No doubt, you are Congress,” Jakhar said, adding that such comments do not behoove a senior leader like Babbar.

On Azad’s statement that he has retired from Rajya Sabha and not from active politics, Jakhar said that “retiring from the upper house never means retiring from politics. Rather, politics has begun now”.

Referring to Sibal’s statement about the need to further strengthen the party, the Punjab Congress chief invited him to join him in working “for the people on the streets to make the party and the country stronger”.

This is the time to be with the people, he said and expressed the hope that all these leaders would now come forward for the “politics of struggle” also.