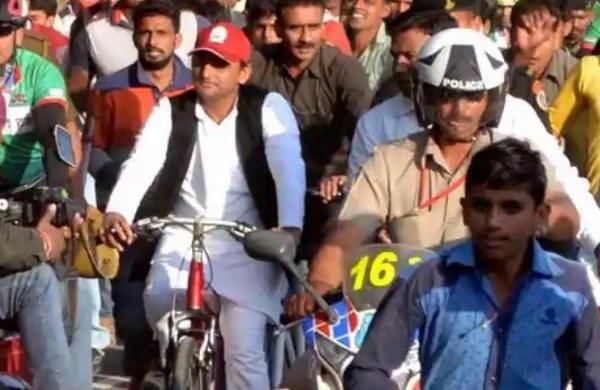 Rampur is the parliamentary constituency of Azam Khan who has been languishing in jail for over a year now in connection with a number of cases.

While commencing the yatra, the SP chief gave the clarion call for Mission 2022. He expressed the confidence that the changing wheels of the cycle would bring about the change in the dispensation in the state in Assembly elections next year.

He claimed that every time the ‘Samajwadis’ hit the roads on bicycles they changed the government in Uttar Pradesh.

“After we took to streets on cycles across the state in 2011, the government fell,” the SP chief said addressing a gathering of party workers in Rampur.

On Saturday, state unit president Naresh Uttam Patel is scheduled to flag off the cycle yatra from Ambedkar Park, Rampur, which will reach Lucknow on March 21 after passing through different districts.

Taking a jibe at UP CM Yogi Adityanath, Akhilesh said that if the state had to be changed for good, first the CM should change himself as he was drawing credit for all the schemes which were introduced during the SP regime.

Commenting on the encounter policy of the BJP government, the SP chief said: “The government knows only one language – thok do. What can be expected from those who believe in such a policy? How can you expect justice from them?”

Referring to the attack on West Bengal Chief Minister Mamata Banerjee, Yadav said, “There is no institution in Bengal left which has not been after her. See what happened, she got hurt. The leg was hurt because these people know that if there is an injury in the leg, no one will be able to campaign.”

He claimed that the day’s dispensation was framing such laws which would lead the country into the hands of private corporate houses. “The democracy is under threat. If democracy has to be saved, then UP will have to be saved and this will happen only if the present government is changed,” said Yadav.

He said there is a similarity between Congress with the BJP. “Without BJP, Congress can’t survive and vice-versa.

“So this time we will rope in smaller parties to stitch a pre-poll alliance. We will not talk to any big player,” said the SP supremo.

Meanwhile, Akhilesh Yadav assured the people of Rampur that once the Samajwadi Party government came to power, all the development works would be done. He reiterated that Azam Khan and his family would get justice from the judiciary.