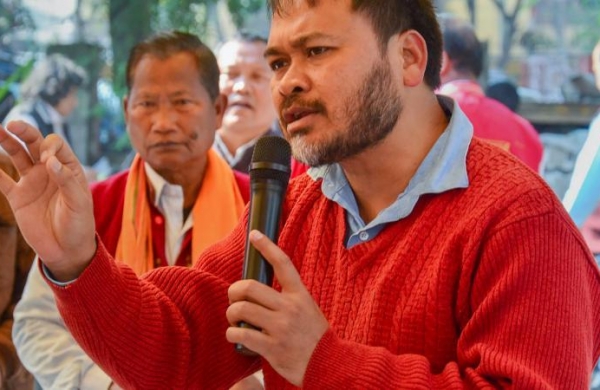 By PTI
GUWAHATI: Assam assembly Speaker Biswajit Daimary on Friday said that he will raise with authorities concerned the issue of alleged manhandling of anti-CAA activist and MLA Akhil Gogoi by security personnel inside the assembly complex.

Besides Gogoi himself, the opposition Congress and AIUDF raised the alleged manhandling of the Independent MLA when he was brought to the assembly complex by jail authorities for the oath-taking ceremony on the first day of the three-day session.

He has been arrested on terror and sedition charges after leading a movement against the Citizenship Amendment Act (CAA).

He is currently in judicial custody.

When Gogoi arrived in a heavily escorted bus from the Gauhati Medical College and Hospital (GMCH), where he is undergoing treatment, he was seen pushed by security personnel when the MLA tried to speak to the media outside the gate.

The security personnel were seen pushing and dragging him again when he was about to step inside the House.

“How can the police behave to an MLA this way? In this pandemic time, 20 policemen came with Gogoi and then pushed and dragged him inside the Assembly building. I request you (Speaker) to take note of this,” Congress MLA Bharat Narah said inside the House.

AIUDF MLA Aminul Islam also demanded “an action” from the Speaker for dragging the jailed leader “in front of a magistrate” coming in the bus.

Reacting to these, Daimary said, “The House cannot do anything as it took place outside. However, I will raise the issue with the authorities concerned.”

Earlier outside the House, Gogoi protested against the behaviour of the security personnel claiming that it is “an attempt to silence his voice”.

“I am an MLA of this Assembly. How can you push and drag an MLA like an animal? This is an insult to the Assamese people and the people of Sibsagar (Gogoi’s constituency). No one can silence my voice,” he shouted while being pushed inside the House.

After taking oath, Gogoi raised the issue inside the House and, according to him, Chief Minister Himanta Biswa Sarma directed Parliamentary Affairs Minister Pijush Hazarika to look into the matter.

On May 11, a Special NIA Court permitted Gogoi to attend the first day of the 15th Assam Legislative Assembly to take oath as a legislator.

Raising the issue of permission granted by the court, Gogoi requested the Speaker to write to the authorities concerned for allowing him to attend the remaining two days of the session.

“I got the Assembly schedule late, so could not inform the court. There is precedence in the country. The Delhi Assembly Speaker had written for allowing a convicted BJP MLA to attend the House. So, you can also do it,” he told Daimary.

The Congress also supported the request and its MLA Narah urged the Speaker to write to the administration to do the needful.

“We want you to write to the chief secretary and the DGP saying that he is an MLA and you want him in every session,” he added.

The Congress MLA also demanded immediate release of Gogoi in view of the COVID-19 pandemic across the state.

Daimary said that he will consult with officials concerned and will intimate Gogoi accordingly.

Gogoi, the chief of the newly formed Raijor Dal who defeated the BJP’s Surabhi Rajkonwari from the Sibsagar constituency, is the first Assamese to win an election from behind the bars without any physical campaigning.

The National Investigation Agency (NIA) had arrested Gogoi in December 2019 for his alleged role in violent anti- Citizenship (Amendment) Act protests across the state.

He was last year admitted at Gauhati Medical College and Hospital for treating COVID-19 and he remains there for other ailments.

On April 14, the Gauhati High Court upheld the bail order of Gogoi by a Special NIA Court by dismissing an appeal by the NIA and said that any act aimed at creating civil disturbance would not come within the purview of the Unlawful Activities (Prevention) Act, 1967 unless committed with the requisite intention.

Gogoi is still in judicial custody as his bail prayer was rejected in another case related to anti-CAA violence and is being investigated by the NIA.