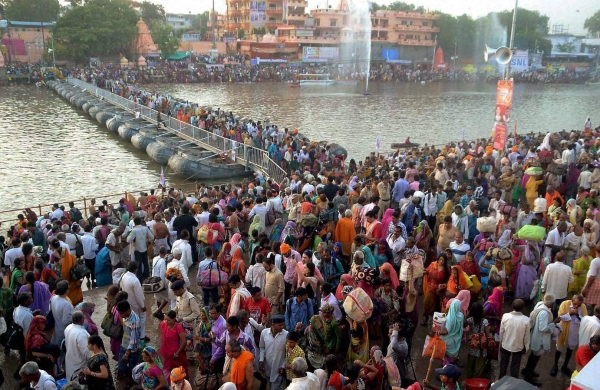 By PTI
LUCKNOW: The Akhil Bharatiya Akhara Parishad (ABAP) has decided it will not keep any demands before the Uttarakhand government during the upcoming Kumbh Mela at Haridwar regarding arrangements during the festival after glacier burst in the neighbouring state triggering floods on Sunday.

A portion of the Nanda Devi glacier broke off in Uttarakhand’s Chamoli district on Sunday, triggering an avalanche and a deluge in the Alaknanda river system that washed away hydroelectric stations, leaving at least seven people dead and 125 missing who are feared dead.

The ABAP will also hold a puja (worship ritual) so that a disaster of such magnitude does not repeat in Uttarakhand and there is minimum loss of lives in this disaster.

Speaking to PTI, Mahant Narendra Giri who heads the Akhil Bharatiya Akhara Parishad said, “The first bathing day in the Haridwar Kumbh is on March 11. At the time of this disaster, we are with the (Uttarakhand) government. We will not keep any demand before the government during the Kumbh at Haridwar, which may pose a problem for them. At this hour of grief and adverse circumstances, we are with the government.” Giri also said, “We will organise a puja so that a disaster of such magnitude does not repeat in Uttarakhand, and there is minimum loss of lives in this disaster.”

Vrindavan-based religious preacher Rasik Bihari Vibhuji Maharaj, who is holding a programme in Lucknow from February 17 to 24, claimed, “This was pre-decided as per the planetary positions. There has been tampering with the environment as well, which led to this.”

Meanwhile, Ashutosh Varshney, a trustee of Ram Sewa Trust told PTI, “A havan programme is being organised, so that lives of people (trapped in the disaster) could be saved, and there could be freedom from all sorts of obstructions. The havan is being held at Sangam area of the city.”