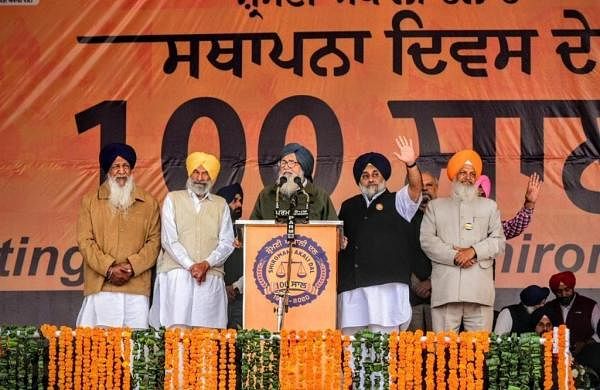 CHANDIGARH: Shiromani Akali Dal (SAD) on Tuesday held a rally in Punjab’s Moga to commemorate the completion of 100 years of its foundation.

A huge crowd was seen on the occasion. “Celebrating 100 years of ‘Nirswarth Seva’, ‘Balidan’ and ‘Sangharsh’ to preserve the pride and honour of Panth, Punjab, Punjabis and Punjabiyat. These are our core values and we are committed to following the same path for peace, progress and prosperity of Punjab,” the SAD said in a tweet.

Meanwhile, the party gave a clarion call for the establishment of a true federal country with cultural, political and economic autonomy to states. It also announced to implement a Rs 50,000 per acre crop insurance scheme besides a commitment to revive the pre-2004 pension scheme for government employees.

Addressing a rally at Moga to commemorate the party’s 100th anniversary, SAD patriarch and five-time CM Parkash Singh Badal said that the Akalis would bounce back to form the next government in the state. He termed the SAD-BSP tie-up a “holy alliance”. The SAD-BSP alliance is all set to repeat their performance of 1996 — the year they swept the entire state.

Badal said the choice before the Punjabis was straight and simple. It’s one between having a government of the Punjabis, for the Punjabis and by the Punjabis on the one hand or having “boastful puppets” remote-controlled by outsiders.

Badal said that it was sad to see the Congress humiliating the poor and Dalit sections of the society by letting them know that they made a CM (Charanjit Singh Channi) who was not their first choice. “Now, they are humiliating him by openly refusing to endorse his performance and not naming him as its CM face.

earlier they had humiliated seasoned Congress leader Sunil Jakhar’s community by first ‘publicising that he would be the next CM. But later media reports said no one from his community could be made the CM of Punjab. “Such communal games are nothing new in Congress. These are both distasteful and dangerous for communal harmony.”

Badal cautioned the Sikhs against conspiracies by the Center and other anti-Sikh forces who are trying to sabotage the sovereign and sacred right of the Khalsa Panth on Seva Sambhal (management) of the Holy Gurdhams of the quom through their legitimately constitutionally-elected representatives.” The Akali stalwart also warned the Centre against the “dangerous adventurism” of the past and said nothing should be done to disturb the atmosphere of peace and communal harmony in Punjab and rest of India.

Addressing the congregation, SAD President Sukhbir Singh Badal announced that farmers would be offered an insurance cover of Rs 50,000 per acre for crop damage. Amidst the cheers, he also announced that the next SAD- BSP alliance government would revive the pre-2004 pension scheme for government employees. He said the next government would also end monopolies in the sand and liquor business by giving mining contracts to one individual and the liquor vend to another. He also announced a waiver of electricity bills of all religious places of worship.

The Moga conference also passed a resolution condemning the Congress government’s attempts to register false cases against SAD-BSP alliance leaders and warned CM Channi, home minister Sukhjinder Randhawa and PPCC president Navjot Singh Sidhu that they would be responsible for the consequences of pursuing vendetta politics.

The resolution, which was read out by Dr Daljit Singh Cheema, also demanded the resignation of the chief minister and home minister in the cash for the transfer case. It also demanded a judicial probe into bribery charges levelled against the home minister who has been accused by a cabinet colleague of taking money for posting SSPs.

Bahujan Samaj Party (BSP) senior vice president Satish Mishra, while speaking on the occasion, said the alliance was set to sweep the forthcoming polls by securing 100 seats. He said the alliance stood for empowering the weaker sections of society.

The SAD was formed on December 14, 1920, and completed 100 years last year. The party did not celebrate the occasion in view of the farmers’ stir. Over the years, the Moga district holds a special place in the state’s political scene as it is a hotbed of farm union activities.

Meanwhile, CM Channi slammed SAD saying that the century-old party has been brought into disrepute by the Badals and Bikram Singh Majithia with drugs, sacrilege and corrupt practices. “Akali Dal cannot revive till Sukhbir and Majithia are at the helm of affairs,” said the CM adding that Sukhbir Badal has pocketed every public resource to further his personal motives.