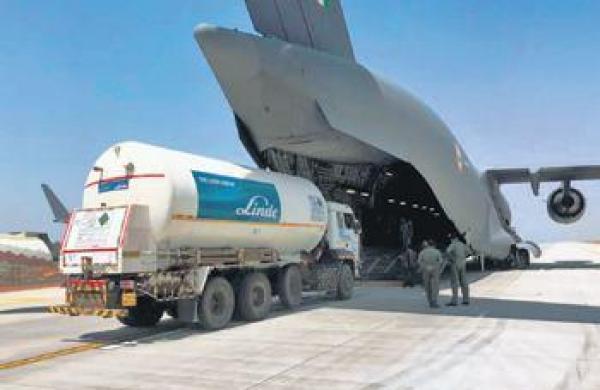 Express News Service
BENGALURU: The Union Government is deploying every available resource to tide over the oxygen emergency in the country. Given the urgency, the Railways, the Indian Air Force (IAF) and the Indian Navy have been pressed into massive Covid-19 relief efforts.

“One C-17 aircraft of the IAF left for Changi International Airport, Singapore, from the Hindon Air Base at 2 am on April 24. It is on its way to offload four empty cryogenic oxygen containers at Panagarh in West Bengal,” said IAF spokesperson Wing Commander Ashish Moghe.

“Another C-17 left Hindon Air Base for the Lohegaon Air Base in Pune for loading two empty cryogenic oxygen container trucks which were then flown to Jamnagar Air Base. The same -C17 aircraft is currently on its second shuttle from Pune to Jamnagar, with a load of two more empty containers,” he added.

One C-17 aircraft transported two empty containers from Jodhpur to Jamnagar early on Saturday. One IAF Chinook helicopter and one AN-32 transport aircraft took Covid testing equipment from Jammu to Leh and from Jammu to Kargil, respectively. “The equipment consisted of bio -safety cabinets, centrifuges and stabilisers. These machines have been made by the Council of Scientific and Industrial Research (CSIR) and now given to the Union Territory of Ladakh to enhance testing,” he added.

Meanwhile, taking into account the rise in Covid-19 cases in the Lakshadweep and Minicoy islands, the Southern Naval Command Headquarters at Kochi has deputed its Naval Ship INS Sharda as ‘Oxygen Express’ to ferry oxygen cylinders to the islands and also to bring back empty cylinders to the mainland for refilling them,” said Defence chief spokesperson Commander Mehul Karnik.

He added that a medical team comprising of two doctors, two nursing assistants, along with essential medical supplies, have also been provided through naval resources to augment medical support to the islands.