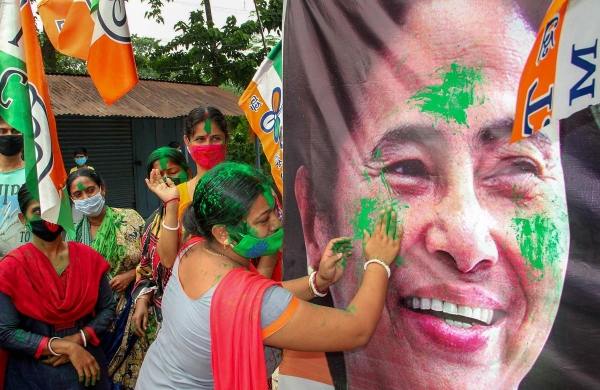 By PTI
KOLKATA: Muslims in Bengal have largely exercised their franchise in favour of the TMC, putting to rest all speculations over their voting pattern, as results showed that the AIMIM and newly floated ISF have failed to curry favour with members of the community.

Veteran TMC leader Siddiqullah Chowdhury stated that the minority community knew well that Banerjee was the only person who could stop BJP’s juggernaut in Bengal.

Voters from the community were unsure of reposing faith in the Sanjukta Morcha — an alliance of the Left Front, Congress and peerzada Abbas Siddiqui’s Indian Secular Front (ISF) — as ideologies of the three parties varied, he said.

“At least 95 per cent of all Muslims in Bengal voted for Mamata Banerjee.

My brothers and sisters from the community would have never voted for a communal force.

They have clearly realised that Mamata didi is the only one that can fight communalism in West Bengal,” he told PTI.

Chowdhury also asserted that Muslims had seen through BJP’s ploy to create divisions on religious lines.

“I had said during my campaigns that Muslims will definitely prove more trustworthy than others.

They will remain faithful to Mamata Banerjee,” the 71-year-old leader, who bagged the Monteswar seat with 1,05,460 votes, said.

Senior Congress leader Abdul Mannan, on his part, contended that scepticism of some party members over formation of a coalition with the ISF cost the Sanjukta Morcha dearly.

“People could not bank on us as the coalition did not shape up as expected, owing to non-acceptance of the ISF by some of our leaders.

And that, in a way, led to our downfall,” Mannan told PTI.

AIMIM’s Asadullah Sheikh, however, reasoned that the Muslims, scared and threatened by the BJP, found no better option than the TMC as they could not have relied on new parties that joined the fray.

“Our Muslim brothers and sisters were tormented by BJP men.

They felt threatened as BJP leaders kept harping on the Citizenship Amendment Act (CAA) and National Register of Citizens (NRC).

Apprehensive of an uncertain future, they could not rely on Sanjukta Morcha or us,” he pointed out.

Sheikh also claimed that the TMC government did nothing to improve the living standards of the community over the past 10 years, but it still managed to pocket votes because “Muslims, more than anything else, wanted to stop the BJP from coming to power in Bengal”.

“The voting pattern has been the same everywhere, be it Lalgola, Bhagawalgola, Berhampore, Malda, South 24 Parganas or Birbum or Uttar Dinajpur,” he explained.

Political analyst Biswanath Chakraborty also felt that the community voted for the TMC to protect their identity.

“It’s 100 per cent true that members of the minority community voted for the TMC in hordes.

They feared losing their identities.

The poll narrative around Citizenship Act and National Register of Citizens scared them,” Chakraborty told PTI.

Interestingly, the Muslim representation in West Bengal assembly has dropped this time when compared to what it was in 2016, even as members of the community voted en masse for the Mamata Banerjee camp.

The new assembly will be having 44 Muslim legislators – 43 of the TMC and one of the ISF — as against 59 during its last term.

Apart from Chowdhury, some of the prominent Muslim legislators in the new Assembly will be TMC heavyweights Firhad Hakim, Javed Khan, Idris Ali and IPS-turned politician Humayun Kabir.

The ISF had contested 26 seats this election, while the Asaduddin Owaisi-led party fielded candidates in seven constituencies.