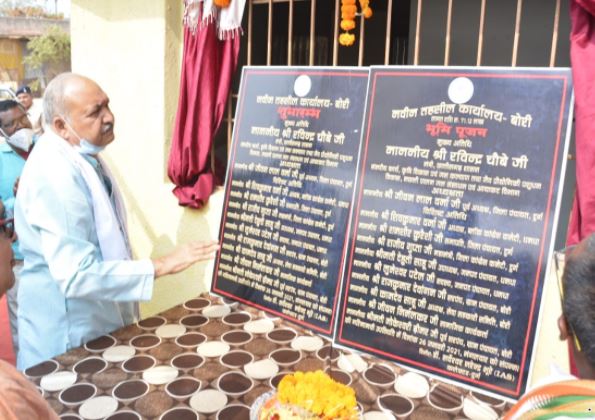 The State Government is making every effort to ensure that the revenue facilities are available near the people of their village. With the formation of new tehsils in the state, now tehsil offices are being launched. In this series, Agriculture and Water Resources Minister Shri Ravindra Choubey inaugurated Tehsil Bhawan of Bori on the occasion of Republic Day.
In his address on the occasion, Mr. Choubey said that the construction of the Bori Tehsil will not make the villagers around Bori go far to the Tehsil office. They will get revenue related facility near their village. He said that people do not have to struggle for revenue related facilities, this is the first priority of the government. The general public is greatly relieved by the government’s decisions on revenue. The Agriculture Minister said that the state government has taken decisions giving priority to the interests of the general public. New paddy buying centers have been opened for the convenience of farmers. Due to these paddy procurement centers, farmers do not have to travel long distances. He said that people have returned to agriculture from agriculture related schemes of the state government. Paddy purchase is on record this time. Chhattisgarh is a rice bowl and the prosperity of the rice bowl depends on the satisfaction of the farmers. He said that the rural economy has been improved by the plans of rural development and its impact is also visible on the urban economy.