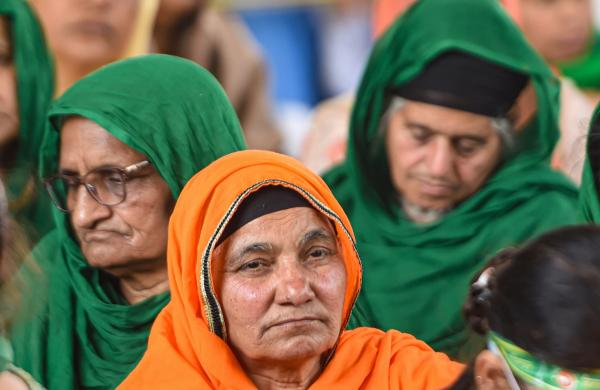 By PTI
NEW DELHI: From managing the stage, food and security to sharing tales of their struggles, and significance of taking part in the farmers’ agitation, thousands of women farmers, students and activists will take over key roles at the Singhu, Tikri and Ghazipur protest sites at Delhi’s borders on International Women’s Day on Monday.

Noting that women contribute significantly to the country’s farming sector, the organisers have laid out elaborate plans to let women farmers take centre stage and all the space under the sky to acknowledge the “big but unrecognised” part of the farming community.

Thousands of women farmers especially from Punjab and Haryana will congregate at Delhi’s borders on Monday and the day will be entirely dedicated to women farmers, activists and students, farmer leaders said.

The day also marks a call to action for accelerating gender parity.

“To celebrate women’s day, the stage will be managed by women, and the speakers too will be women. And there will be a small march at Singhu border, the details for which will be shared later. We are expecting more women to join at different protest sites,” senior farmer leader Kavita Kurugranthy, who is also a member of the Samkyukta Kisan Morcha (SKM), told PTI.

Thousands of farmers, mostly from Punjab, Haryana and western Uttar Pradesh, have been camping at the Delhi border points — Singhu, Tikri and Ghazipur — for over three months, demanding the repeal of farm laws and a legal guarantee on the minimum support price (MSP) for their crops.

The protesting farmers have expressed apprehension that these laws would pave the way for the dismantling of the MSP system, leaving them at the “mercy” of big corporations.

On the occasion of International Women’s Day, around 15,000 women farmers along with college principals, teachers and social workers will join the protest sites at Singhu and Tikri borders, the organisers said.

“Women are a big part of the farming community but they don’t get recognised. In fact, they work more than the men. Approximately 10,000 women from different parts of Punjab and Haryana will come to the borders to be part of the women’s day program,” farmer leader Kulwant Singh Sandhu said.

Sandhu said they have also asked women farmers to join the different protest sites in Punjab and Haryana on the occasion.

Women protesters will talk about their rights, struggles and significance of participation in the movement at the two stages at Tikri border, one of the organisers said.

“Women will be taking over security roles at Singhu border. Hundreds of women from different parts of Punjab are coming in vehicles and will join us at the borders tomorrow. We are expecting a gathering of around 15,000 people at Tikri and 4,000 people at Singhu to mark International Women’s Day,” said Jagmohan Singh of Bharatiya Kisan Union (Dakaunda), Punjab.

Farmer leader of Krantikari Kisan Union Avtar Singh Mehma also said that stage management at all borders will be done by women on the occasion of International Women’s Day.

“Those delivering speeches on the stage will also be women, whether they are from a student organisation, a farmer organisation or simply an organisation doing social work,” Mehma said.