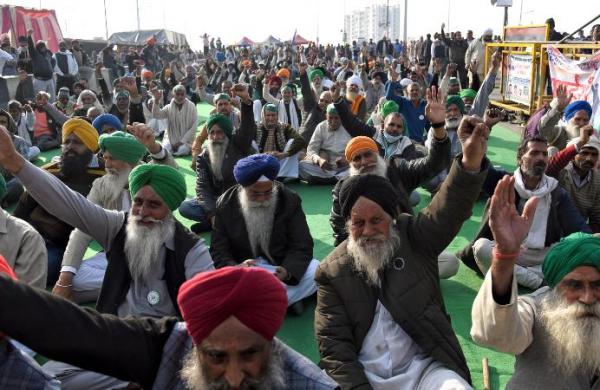 By PTI
CHANDIGARH: Several farmers from parts of Haryana on Friday decided to head towards Delhi’s borders to join the ongoing agitation against agri laws, saying the government’s moves against peasant leaders will not weaken their protest.

The Ghaziabad administration had on Thursday given an ultimatum to agitating farmers to vacate the Uttar Pradesh Gate protest site by midnight, while the Delhi Police had issued lookout notices against farmer leaders.

A number of farmers from Jind, Rohtak, Kaithal, Hisar, Bhiwani and Sonipat will be going towards various protest sites at Tikri, Singhu and Ghazipur, farmer leaders from Haryana claimed.

“We cannot tolerate a senior farmer leader being pushed to this situation. We are all united and our stir will continue till we force the government repeal the farm laws,” said a protesting farmer near Rohtak’s Madina toll plaza on Friday.

Farmers in Jind’s Kandela blocked the Jind-Chandigarh road late for a few hours on Thursday night.

They were protesting against the Ghaziabad administration’s ultimatum to the protesting farmers at Uttar Pradesh Gate to vacate the site.

Khap leader from Jind, Azad Singh Palwa told reporters in Jind that it is being propagated that farmers’ agitation has weakened, which is not the case.

“We condemn the lookout notices to the farmer leaders. We also condemn the government for serving ultimatum to vacate a protest site.

We want to warn the government that such moves will not weaken this agitation, but only make it stronger,” he said.

He also said that donations will be raised from villagers and more people will be mobilised to join the agitation.

“We will be sending tractor loads of essential supplies like food, ration, clothes for our brethren who are fighting this agitation. More people will be sent to join the stir,” he said.

“All farmers are united, no one can break this agitation, which will continue till these farm laws are repealed,” said a protesting farmer.

He said the protest near the toll plaza will continue and will be intensified in the days to come.

In Karnal, local farmers had resumed their ‘dharna’ at the Bastara toll plaza on Thursday, a day after the administration had got it vacated.

However, on Friday there were reports of heavy police deployment near the toll plaza and administration had got the site vacated once again and normal operations at the plaza resumed.

On Thursday, a group of protesters near the Bastara toll plaza had burnt an effigy of actor-turned-activist Deep Sidhu, who has been booked in connection with the Red Fort incident in Delhi on January 26.

On Friday, a large number of farmers reached near the toll plaza in Panipat and held a protest expressing solidarity with peasants protesting near the Delhi’s borders.

“We condemn the lookout notices against farmer leaders. his agitation will now gain more momentum and force the government to rollback the farm laws,” said a protesting farmer in Panipat.

The Delhi Police on Thursday issued lookout notices against farmer leaders and announced a probe into the “conspiracy” behind the Republic Day violence.

Thousands of farmers have been protesting at Delhi’s borders with Haryana and Uttar Pradesh demanding rollback of the Farmers’ Produce Trade and Commerce (Promotion and Facilitation) Act, 2020, the Farmers (Empowerment and Protection) Agreement on Price Assurance and Farm Services Act, 2020 and the Essential Commodities (Amendment) Act, 2020.