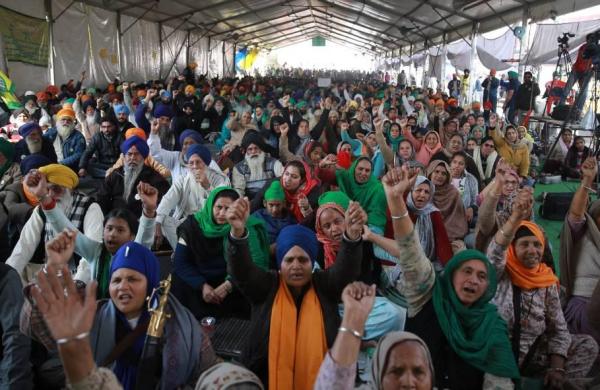 By PTI
NEW DELHI/GHAZIABAD: A day after Prime Minister Narendra Modi said his government was just a “phone call away” for talks with the farmers agitating against the farm laws, union leaders on Sunday said a “respectful solution” should be found but they will not agree to anything “under pressure”.

Farmer leaders Rakesh and Naresh Tikait demanded that the government release the protesters to create a conducive environment for talks, even as Prime Minister Modi, during his monthly radio address, said that the country was saddened by the “insult” to the Tricolour on the Republic Day, referring to the violence at Red Fort during the farmers’ tractor parade.

As hundreds of farmers continued to converge at Ghazipur on the Delhi-Uttar Pradesh border following a tearful Bharatiya Kisan Union leader Rakesh Tikait’s impassioned appeal on Thursday, the ripples spread deeper in western Uttar Pradesh where a mahapanchyat was held in Baghpat in support of the stir, the third in as many days in the key region.

The farmers will honour the dignity of the prime minister, but are also committed to protecting their self-respect, the Tikait brothers who are leading the agitation asserted, even as they warned that the farm laws issue could cost the BJP dear electorally.

“They (Farmers) are free to vote anyone, we cannot ask them to vote for a particular party. If a party has hurt them, why would they bring it to power again?” Naresh Tikait said. Both the leader said they were open to talks with the government to find a “middle path”.

Prime Minister Modi had on Saturday said his government’s offer on agri laws made to protesting farmers “still stands” and the Centre was just a “phone call away” for talks, days after violence broke out in parts of the national capital on Republic Day.

Rakesh said they will honour and respect the dignity of prime minister, and added the farmers don’t want the government or Parliament to “bow down to them”.

But at the same time, he added, they will also ensure the self-respect of farmers is protected.

During their January 26 parade, scores of protesters had stormed the Red Fort, with some of them hoisting religious flags on its ramparts.

The two leaders condemned Republic Day violence and said it was unacceptable, even though they alleged it was the result of a conspiracy.

They said the Tricolour was above everything and they will never let anyone disrespect it.

The Delhi Police has registered nearly 40 cases and made over 80 arrests in connection with the violence and vandalism.

“The government should release our men and prepare an environment conducive for talks. A respectful solution should be reached. We will never agree to anything under pressure,” Rakesh Tikait asserted.

Naresh, the elder of the two Tikait brothers and Bharatiya Kisan Union national president, (BKU) told PTI, “Talks are necessary. A solution should be found.”

“The middle path could be that the BJP government assures farmers it won’t implement the three laws during its tenure. We will also try convincing the farmers. What else can be better than this?” he suggested.

“We respect the prime minister’s post. Farmers should be respected too,” he said.

Naresh and Rakesh are sons of Mahendra Singh Tikait, once counted among the tallest farmer leaders of the country.

More tents came up at the UP gate protest site in Ghazipur on Sunday and many waited for hours to talk to Rakesh Tikait or click a selfie with him.

The farmer leader remained busy meeting his supporters and talking to the media, halting only when his voice gave away.

A Bharatiya Kisan Union member said Rakesh has not been able to sleep for more than three hours a day for the past three days.

Small groups of farmers took out marches, carrying the Tricolour and shouting slogans.

Shiromani Akal Dal chief Sukhbir Singh Badal, whose party pulled out of the NDA government over the three farm laws, met Tikait for around 10 minutes.

In Baghpat, a ‘sarv khap mahapanchayat’ took place at the Tehsil ground with farmers pouring in from nearby districts as well in tractor-trollies.

It was the third ‘mahapanchayat’ of farmers in the region after a massive congregation in Muzaffarnagar on Friday and in Mathura on Saturday, both resolving to support the ongoing BKU-led protest.

BKU leader Rajendra Chaudhary told the crowd, “the movement has to be continued with full strength.”

ALSO READ | Thousands converge for third ‘mahapanchayat’ in UP, resolve to support stir over farm laws

The two-month-long protest against the farm laws appeared to be losing steam after widespread violence during a tractor parade by farmers on the Republic Day, but an emotional appeal by Rakesh Tikait gave it a fresh lease of life.

Delhi’s Singhu border also saw more farmers from Punjab and Haryana joining the protest, even as some complained of poor internet connectivity and difficulties in getting water and food supplies.

The opposition parties are likely to raise the issue of farm laws vociferously in Parliament and have already stepped up attack on the government.

Several parties, including the Congress and the SAD, and media bodies on Sunday condemned the police action against two journalists who were picked up during the farmers’ protests at the Singhu border for allegedly misbehaving with police personnel.

They said such crackdowns impinge on the media’s right to report freely and interferes with its right to freedom of expression.

While Singh was later released, the police arrested Punia on Sunday.

The Indian Women’s Press Corps, Press Club of India and the Press Association demanded Punia’s immediate release and said no journalist should be disturbed while carrying out their duties at any place.

Samajwadi Party chief Akhilesh Yadav said the farmers were deeply hurt by the the BJP’s moves to “defame” them.

Meanwhile, Agriculture Minister Narendra Singh Tomar expressed dismay over NCP supremo Sharad Pawar’s tweets criticising the farm laws, saying they were a mix of “ignorance and misinformation” about the legislation, and hoped that the veteran leader will change his stand after knowing the “facts”.

In a series of tweets, Pawar had on Saturday said the new agriculture laws of the Union government will adversely impact the Minimum Support Price (MSP) procurement and weaken the `Mandi’ system.

Tomar said Pawar, who is a veteran leader, is also considered well-versed with the issues and solutions relating to agriculture.

“Since he speaks with some experience and expertise on the issue, it was dismaying to see his tweets employ a mix of ignorance and misinformation on the agriculture reforms. Let me take this opportunity to present some facts,” Tomar said on Twitter and went on to stress that the “apprehensions” expressed by Pawar have no basis.

Meanwhile, a fresh war of words also erupted between the AAP and the ruling Congress in Punjab, with the former demanding that the state police provide security to the protesting farmers at Delhi borders and Chief Minister Amarinder Singh terming it “arbitrary, absurd and irrational”.

Thousands of farmers, mostly from Punjab, Haryana and parts of UP have been protesting at Delhi’s borders for over two months now, demanding a rollback of the Farmers’ Produce Trade and Commerce (Promotion and Facilitation) Act, 2020, the Farmers (Empowerment and Protection) Agreement on Price Assurance and Farm Services Act, 2020 and the Essential Commodities (Amendment) Act, 2020.

The government has offered some concessions including keeping the new farm laws on hold for 1-1.5 years and the Supreme Court has set up a panel to look into the matter while keeping the contentious legislation in abeyance for two months.

However, the agitating farmer unions have rejected both and intensified their stir.