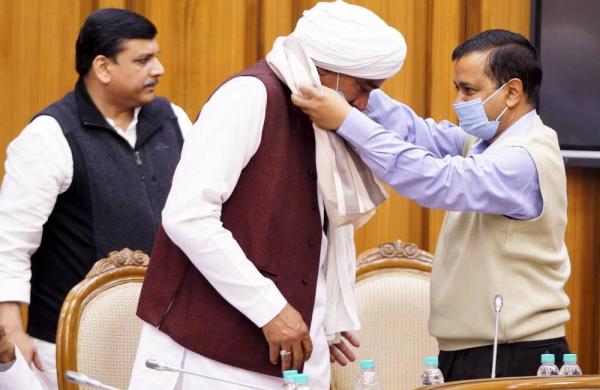 The meeting came ahead of a ‘Kisan Mahapanchayat’ that Kejriwal is scheduled to address on February 28 in Western UP’s Meerut.

The AAP has already announced that it is contesting the Assembly polls in UP in 2022 and this will be the first major appearance of Kejriwal in the poll-bound state.

Over 40 farmer leaders from Western UP region that has been active in the farm laws protests at Delhi borders, specially Ghazipur border point with neighbouring UP, attended the meeting held at Delhi Assembly premises.

“These anti-farmer laws are death warrants to the farmers. With the implementation of these laws the crops will go to the hands of a few industrialists and the farmers of India will become labourers in their own land.”

“The central government should immediately withdraw all the three black laws and extend legal guarantee of MSP on all the 23 crops following the recommendations of the Swaminathan Commission,” the AAP chief said.

The government should talk to the farmers.

If the government does not listen to the farmers then who will, he questioned.

No representative of Samyukt Kisan Morcha (SKM), which is leading the protest against farm laws at Delhi borders for nearly three months, was present in the meeting, sources said.

The outfit has already declared its agitation as non-political one.

“Meerut Kisan mahapanchayat on February 28 will be joined by the farmers in large numbers. Discussion on the three farm laws will take place during that Mahapanchayat where immediate rollback of these laws brought by the BJP-ruled central government will be demanded by the farmers,” Kejriwal said.

The BJP is continuously saying that these laws will benefit the farmers but its leaders have yet not clarified how, he added.

Talking to the media, farmer leader Rohit Jakhar of Rashtriya Jat Mahasangh said that while the UP government cut electricity and water supply at the Ghazipur protest site, Kejriwal’s government supported farmers’ protest by providing them water and toilets.

“Our support will go to those who will talk about our problems. The BJP government has hurt our self respect, we will give our reply through our votes,” Jakhar said.

He said Kejriwal gave respect to the farmer leaders just as Lord Krishna gave respect to his friend, Sudama, and asserted the agitation will continue till the Centre fulfills farmers demands.

Another participant of the meeting, Chaudhary Yashpal Singh, said, “Arvind Kejriwal has assured us support.”