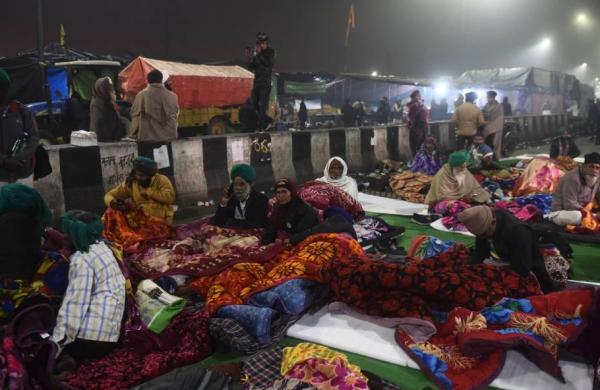 By PTI
NEW DELHI: The Tikri border, one of the epicentres of the agitation against the Centre’s farm laws, witnessed tense moments on Friday as a group of people claiming to be locals staging a protest demanding removal of the farmers there.

The group of around 30-40 people from nearby areas, carried national flags and raised slogans against the alleged “dishonour” of the Tricolour by the farmer protesters on January 26.

“Everyone saw how the national flag was dishonoured at Red Fort during tractor rally by farmers. We cannot allow such elements to stay here and work against the country in the garb of farmers,” one of the group members said.

Heavy police force present on the spot persuaded the group to go back after some time.

“We have nothing against the farmers and their demands. But we also have our rights and problems. Our livelihood has been hit and we cannot move about freely due to closure of the border for over two months,” said another group member.

The agitating farmers alleged that the BJP was behind the protest by the “so-called” locals.

“After failing to break our resolve to continue the agitation against the farm laws, they are now sending goons to create mischief and disturbance,” one of the protesting farmers Vija said.

In the evening, police further fortified the barricading at the border point by dumping earth and placing concrete blocks to prevent movement of vehicles towards Delhi.

In a similar protest at Singhu Border, police fired tear gas and resorted to baton charge Friday to break up a clash between farmers and a large group of men claiming to be local residents who hurled stones at each other.

The Delhi Police said 44 people including a man who attacked SHO (Alipur) Pradeep Paliwal with a sword have been arrested on charges of attempt to murder and obstructing public servant, among others.

The man who attacked Paliwal has been identified as Ranjeet Singh, 22, from Punjab, an official said.

On Friday around 1.30 PM, about 200 local villagers reached the Singhu border, a senior police officer said.

They went to meet the leaders of the Kisan Mazdoor Sangharsh Committee faction at the Alipur red light to demand that the protesters vacate the area and open the border, he said.

“They said that they have been providing all kind of help to the protesters for the last two months but now the protest is affecting their livelihood. Hence, they requested them to vacate the road. They had come on Thursday as well with the same request,” Additional Delhi Police PRO Anil Mittal said.

Some farmers resisted and pushing and pulling of the police barricades, which had been erected to secure the langar tents, ensued.

While SHO Paliwal was trying to convince the farmers to stop stone pelting from their side, he was suddenly attacked by Singh, who was overpowered and apprehended at the spot, they said.

A case has been registered at the Alipur police station and investigation taken up, the police said.

However, the protesters claimed that those who visited the protest site were not locals but goons armed with sticks.

“They are not locals, but hired goons. They were throwing stones, petrol bombs at us. They attempted to burn down our trolleys also. We are here to resist them. We won’t leave the place,” said Harkirat Mann Beniwal, 21, from Punjab’s Khana district.

Some videos from the protest site purportedly showed a group raising the slogan of ‘goli maro salon ko’.

Meanwhile, nine farmers were arrested by the police for attacking one of its personnel at the Burari protest site.

Several farmers have been camping at the DDA Ground in Burari on the outskirts of the national capital since November 28 against the Centre’s three agriculture laws.

The team is collecting forensic evidence at the Ghazipur border, officials said.

The Delhi Police has urged people to share any evidence or information about the Republic Day violence.

“All members of the public, including media persons, who are witnesses to the incidents or have any information about the incident or have captured any activity on their mobile phones or camera, are hereby requested to come forward and give their statements/footage/picture in their possession at room number 215, second floor, Old Delhi Police Headquarters, ITO during office hours, on any working day or contact on 8750871237 or 011-23490094 or send e-mail on kisanandolanriots. 26jain2021@gmmail. com,” the appeal stated.

Thousands of protesting farmers had clashed with the police during the tractor rally called by farmer unions on January 26 to highlight their demand for repeal of the Centre’s three farm laws.

Many of the protesters, driving tractors, reached the Red Fort and entered the monument.

Some protesters even hoisted religious flags on its domes and the flagstaff at the ramparts, where the national flag is unfurled by the prime minister on Independence Day.

Meanwhile, the Bharatiya Kisan Union (Lok Shakti) on Friday re-launched its stir over the new farm laws, just a day after it had announced withdrawing its protest in Noida.

In a video message, Singh also appealed to BKU (Lok Shakti) supporters in western Uttar Pradesh to reach the farmers’ mahapanchayat that was convened in Muzaffarnagar.

“Yesterday, an MLA of Ghaziabad had reached Ghazipur protest site along with his armed supporters. This act has distressed the soul of (BKU leader) Rakesh Tikait. An announcement was made regarding his arrest and ending of the protest there, but the MLA vitiated the atmosphere there and Tikait broke down,” Bhati said.

Bhati said his faction will stand shoulder to shoulder with Tikait’s BKU in the fight against the new contentious farm laws.

BKU (Lok Shakti) had been camping at the Dalit Prerna Sthal in Noida since December 2, demanding the rollback of the three new farm laws, legalization of the minimum support price for crops and implementation of recommendations of the Swaminathan Committee report.

Bhati, the faction’s national president, had Thursday announced ending the protest in view of the violence during farmers’ tractor parade in Delhi on Republic Day.

He and some other of his union members later Thursday also met with Union Agriculture Minister Narendra Singh Tomar.

On the union chief’s call, office bearers of BKU (Lok Shakti) attended the mahapanchayat in Muzaffarnagar, while scores of supporters reached Ghazipur border to join the stir there on Friday evening.