After pointing out ‘mess’ at GTA, now Bengal Governor attacks Mamata over appointments of VCs of 24 universities 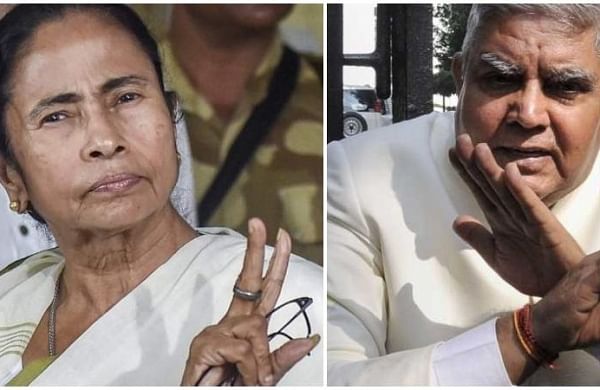 KOLKATA: West Bengal Governor Jagdeep Dhankhar Thursday claimed that appointments of vice-chancellors of 24 universities in the state were made without his approval or in defiance of orders.

Dhankhar is the ex-officio chancellor of the state-run universities, including Calcutta University, Jadavpur University and Presidency University.

“VCs of 24 Universities appointed @MamataOfficial in disregard of law. These are ex facie in defiance of specific orders or without approval by Chancellor-the Appointing Authority,” the governor tweeted.

“These appointments carry no legal sanction and would be forced to take action unless soon recalled,” he added.

The warning comes close on the heels of chancellors and vice-chancellors of private universities not attending a meeting called by the governor earlier in the month at the Raj Bhawan here.

Dhankhar is the visitor of private universities in the state.

Claiming that the Gorkhaland Territorial Administration (GTA) — an autonomous district council for Darjeeling and Kalimpong areas, was in a complete “mess”, Dhankhar on Wednesday sought updates about its operations from officials concerned.

He also noted that GTA accounts have not been audited by CAG since its formation a decade ago.

The governor, who is on a visit to Darjeeling, has asked the GTA administrator to personally update him about the council’s operations and way of functioning.

He also sought an explanation in writing for “non-compliance of earlier directives”.

“GTA @MamataOfficial in a mess. No CAG Audit for a decade since inception. No report to Governor #GTA functioning as per Section 55 (10) GTA Act, 2011,” Dhankhar tweeted.

“Administrator #GTA directed to personally update and make available Reports under Section 55(10) of GTA Act by 30 December, 2021,” he said.

Section 55 (10) of GTA Act, 2011 stipulates that the governor shall obtain a report on the functioning of the Gorkhaland Territorial Administration and cause that report to be laid on the table of the Legislative Assembly annually.

The governor, in a letter to the GTA administrator, a copy of which was attached with the Twitter message, said that a disturbing situation has arisen, pointing towards “serious dereliction of duty by the concerned” with no report being made available to him in spite of firm directives.

He also said that on the last occasion, the secretary of GTA, under instructions of the then administrator, who was on leave, had called on him in Darjeeling.

Maintaining that there has been no response to issues flagged for urgent intervention by the administrator, the governor stated that “a serious view of the same is taken at this end and for such acts of omission and commission appropriate steps will emanate.”

Insisting that the sequence of events indicate a determined defiance of the administrator, Dhankhar said inputs received on his end allege that GTA has become a “den of corruption”, where funds have been wrongly utilised in the absence of audit by the Comptroller and Auditor General.