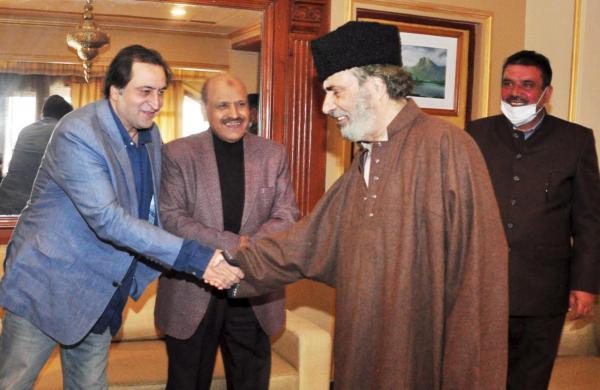 The party is hopeful that many leaders from the Valley will also join them in the coming days.

Seventy-four-year-old Baig, who had started his political career with Peoples Conference in the 1970s, joined the party on Wednesday.

Baig’s ghar wapsi is a major shot in the arm for the party. Being a former MP and two-time ex-MLA from Baramulla in north Kashmir, he has a support base in north Kashmir.

His entry will further consolidate PC’s ground in north Kashmir and turn it into a strong political force in the region comprising three districts of Baramulla, Kupwara and Bandipora.

The party is hopeful that more leaders will join the party in the coming days.

Muzaffar Baig’s wife Safina Baig, who won the DDC chairman’s post in Baramulla with the support of PC, is also likely to join the party in the coming days. Safina, who was PDP’s woman wing president, contested the DDC polls as an independent candidate after being denied mandate by PDP.

Party spokesperson Adnan Ashraf told The New Indian Express that many leaders including some top political figures from the south and central Kashmir will be joining the party in the coming days.

Without divulging any names, he said, “PC will not be restricted or confined to north Kashmir only. We will have people from all parts of the Valley.”

The PC had been a part of the seven-parties Gupkar Alliance on Article 370 restoration but quit the alliance after DDC polls alleging that NC and PDP fielded proxy candidates in the polls.

Of the 110 seats won by the Gupkar Alliance, PC had won eight seats.

The PC has wrested control of Kupwara DDC, where it has got its own chairman and if Safina Baig also joins the party, then it would control two out of three north Kashmir districts.

The PC will be vying with the Apni Party of influential businessman and former PDP leader Altaf Bukhari to emerge as a strong political force in the Valley to challenge NC and PDP.