After escaping fire on train, teen archers from MP shoot for glory at National Championship 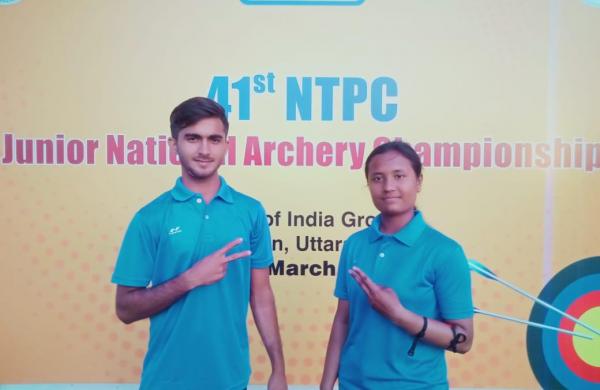 By Express News Service
BHOPAL: It could aptly be described as a memorable journey which began with the escape from jaws of death and culminated with shining medals of success – a real-life saga which has the potential of becoming a successful reel-life thriller.

A bunch of promising teenage archers from Madhya Pradesh, first escaped the jaws of death by coming out of a burning train in the nick of time on Saturday afternoon, remained awake entire night just to prepare their armour, before shooting the bulls-eye in three events to end up with two silver and one bronze medals on the inaugural day of the 41st National Junior Archery in Dehradun on Sunday.

It all started on Saturday afternoon, when the C5 coach of the New Delhi-Dehradun Shatabdi Express train was engulfed in a major inferno following an electric circuit in the Kansro area of Rajaji Tiger Reserve-National Park between Haridwar and Dehradun. Boarding the coach among others were eight teenaged archers (four boys and four girls) and two coaches of MP Archery Academy.

“We spotted the fire emanating from near one of the toilets of the coach and all of us were lucky to escape from the coach before it was engulfed by the inferno. While all of us managed to come out alive, our belongings, including luggage and entire kits (bows and arrows of US and Korean make) were reduced to ashes in the blaze. We helplessly watched our entire sports kit-luggage and our dreams of making MP proud at the tourney get reduced to ashes,” recounted team’s assistant coach Ashok Kumar Yadav.

While the entire 10-strong MP Junior Archery team left for Dehradun in the same train later, the MP Sports and Youth Welfare Minister Yashodhara Raje Scindia immediately swung into action on coming to know about the entire equipment and luggage of archers getting reduced to ashes.

“I’ll never forget in my life, the MP Sports Minister talking to us over phone and assuring us that she will get new equipment in time. While narrating how she along with her siblings bravely faced the situation when her mother Rajmata Vijayaraje Scindia was jailed during Emergency days, she asked us to fight out the situation as real brave-hearts,” Yadav remembered.

Owing to proactive efforts by the MP Sports Minister, MP Sports Director Pawan Jain and our chief coach Richpal Singh, the new bows and arrows arrived from Patiala at around 1.30 am on Sunday. “We were awake the entire night cutting and calibrating the arrows and other equipment for the main contest in the morning,” Yadav reminisced.

Not ready to be bogged down by the trying conditions, the MP Archery Academy archers not only featured in the tourney on the first day, but actually clinched three medals. While 17-year-old Amit Kumar started the show by winning the bronze in the individual 70 m Recurve, it was ensued by an even better show by 14-year-old Mandla district girl Soniya Thakur, who won the silver medal in the girls section of the same event on her national junior championship debut.

And that wasn’t all, as Amit and Soniya later teamed up to win another silver medal in the mixed pair event towards the closing hours of the inaugural day.

“When we began the journey for the tourney from MP on March 12, we had targeted winning medals in most events, but the ghastly fire on Saturday and then sleepless Saturday-Sunday night had nearly made us stop dreaming of even reaching medal rounds of the events. But goaded by our sports minister’s pep-talk and steely resolve of our teenaged archers we won not one, but three medals. Now after a full night sleep, we’re aiming gold medals in Monday events,” the young assistant coach of the team told The New Indian Express.

The teenage archers’ “conquest amid adversity” feat was saluted over twitter by CM Shivraj Singh Chouhan, who congratulated both Amit Kumar and Soniya Thakur for their podium finish at the national tourney.