After Assam, JDU likely to go it alone in Uttar Pradesh Assembly elections 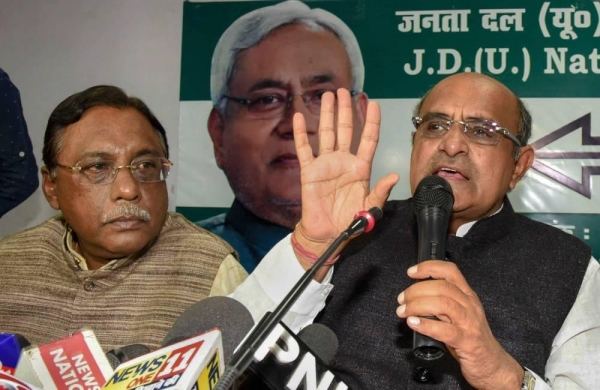 Express News Service
PATNA: JDU, the BJP’s political ally in Bihar, will turn political foe to the saffron party during the Uttar Pradesh assembly elections in 2022.

Almost determined to go alone in the 2022 UP assembly polls suited to make political presence felt.

According to party sources,  KC Tyagi-national general secretary of party will be in-charge of JDU in UP elections in 2022 after contesting in West Bengal, Assam and other states going to poll this year.

The JDU will try to consolidate its position in the eastern part of Uttar Pradesh more than other parts primarily because of the areas being close to Bihar border.

The constituencies, which have a considerable population of ‘Kurmi, Koeri, and EBCs in addition to upper castes, will be preferred to be contested by the JDU. After Assam, UP will be the second state with BJP government in which JDU will go against the BJP.

“The JDU has turned more aggressive than ever before after the recent Arunachal Pradesh incident of defection of its six MLAs to BJP. After that, the party has become obdurate to contest without being in alliance with the BJP outside Bihar,” said JDU source.

In UP, the JDU may contest at least 100 to 120 seats depending upon the situation till then.

To contest in UP assembly elections in 2022 alone was also decided unanimously at the meeting of party national executive in Patna recently.

KC Tyagi has also confirmed this to a section of media in New Delhi stating the decision to contest in the upcoming UP elections has nothing to take with the alliance with BJP in Bihar.

“Alliance in Bihar with BJP is limited to Bihar only. In Jharkhand also, the JDU had fought alone earlier,” a JDU leader.

The JDU has also decided in principle to project KC Tyagi as the leader of party and CM candidate in Uttar Pradesh, if the party is voted to power in future.