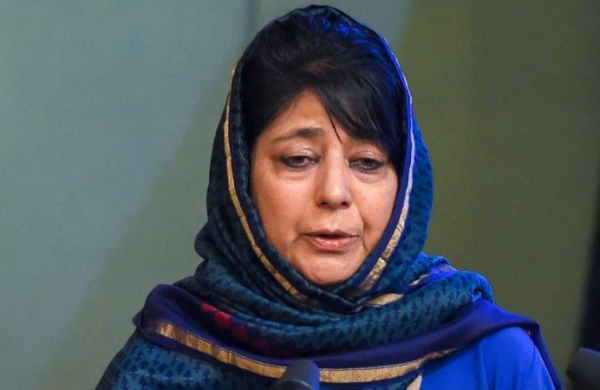 Express News Service
SRINAGAR: The Peoples Democratic Party chief and former J&K Chief Minister Mehbooba Mufti on Monday termed controversial Armed Forces Special Powers Act (AFSPA) as a “blot on democratic values of the country” and asserted that her party would fight for the restoration of the special status of Jammu and Kashmir even if left alone.

“AFSPA is a blot on the democratic values of this country,” Mehbooba said while addressing a party workers convention in the border town of Rajouri in Jammu province. She was on a three-day visit to border districts of Rajouri and Poonch.

She said there have been several instances when the absolute powers enjoyed by troops under AFSPA were misused and innocent lives lost.

“Three innocent youth from Rajouri were abducted and killed in cold blood in Shopian in July last year to win medals. The details emerging as to how the encounter was staged sends shivers down the spine”, the PDP chief said adding, “In recent instances, very young people have been killed in so-called encounters in contrary to the claims of families of the deceased”.

She was referring to December 30, 2020 Lawaypora encounter in the outskirts of Srinagar in which security forces say three militants were killed while families of the three slain youth allege that they were innocent and not remotely connected to militants.

Referring to August 5, 2019 abrogation of Articles 370 and 35A, which granted special status and special privileges to J&K residents, Mehbooba said the special status of J&K should be restored.

“My party shall carry forward the struggle even if it is left alone to fight.  I have made it clear that my personal struggle is only for the restoration of dignity and honour of people,” she said.

The PDP is part of six-parties alliance – Peoples Alliance for Gupkar Declaration, which has vowed to fight for the restoration of J&K’s special status.

“My party and our workers have pledged to be with me in the fight, which is surely going to be long and tough. I want to assure you that we shall not give up and I am confident that the day will come when New Delhi will restore everything forcibly and unconstitutionally snatched from us along with interests”, said Mehbooba and urged people to stand firm and united.

Taking a dig at BJP, the former CM said, “The ruling BJP was tearing apart the very spirit of India to build its organisation in furtherance of its vindictive and fanatic political agenda”.

“Journalists and columnists are being booked for reporting facts, farmers are being targeted and defamed for seeking their rights, students and minorities are being pushed to walls. NIA, CBI, ED and every agency was being used to settle political scores and curb democratic voices”, she alleged.

The PDP chief said the sole purpose of “brazen use of muscle power and government machinery” to squeeze political space in the country is aimed at strengthening BJP as an organisation”. “Unfortunately this is being done at the cost of India’s interests being at home or at external affairs”.