Afghan territory must not be used for terrorism: Delhi dialogue on Afghanistan crisis 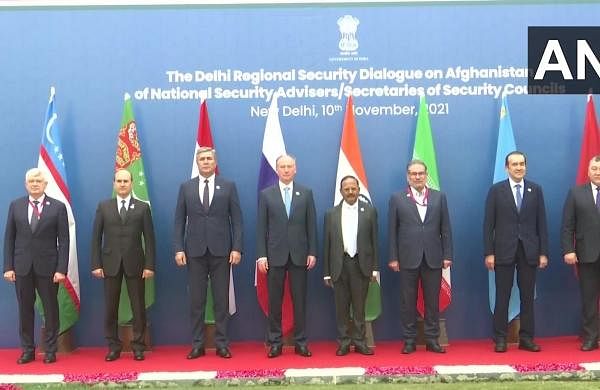 NEW DELHI: Top security czars of India, Russia, Iran and five central Asian countries on Wednesday pledged to work for ensuring that Afghanistan does not become a safe haven for global terrorism and called for the formation of an open and truly inclusive government in Kabul.

At the end of an India-hosted security dialogue on Afghanistan, the security officials came out with a declaration reaffirming that Afghan territory should not be used for sheltering, training, planning or financing terrorist activities.

The Delhi Regional Security Dialogue on Afghanistan voiced concern over the deteriorating socio-economic and humanitarian situation in that country and underlined the need to provide urgent humanitarian assistance to the Afghan people.

The security officials also said that humanitarian assistance should be provided in an unimpeded, direct and assured manner to Afghanistan and that the assistance is distributed within the country in a non-discriminatory manner across all sections of Afghan society.

The central Asian countries that attended the dialogue are Kazakhstan, Kyrgyzstan, Tajikistan, Turkmenistan and Uzbekistan.

In his opening remarks, NSA Ajit Doval said the recent developments in that country have important implications not only for Afghan people but also for the region.

The declaration said the officials reiterated strong support for a peaceful, secure and stable Afghanistan while emphasising the respect for sovereignty, unity and territorial integrity and non-interference in its internal affairs.

It said they also expressed deep concern over the suffering of the Afghan people arising from the security situation in Afghanistan and condemned the terrorist attacks in Kunduz, Kandahar and Kabul.

They specifically emphasised that Afghan territory should not be used for sheltering, training, planning or financing any terrorist acts.

The declaration said the officials condemned in the strongest terms all terrorist activities and reaffirmed their firm commitment to combat terrorism in all its forms including its financing.

It also referred to the need for dismantling terrorist infrastructure and countering radicalisation to ensure that Afghanistan does not become a safe haven for global terrorism.

The officials also called for collective cooperation against the menace of radicalisation, extremism, separatism and drug trafficking in the region.

They stressed the necessity of forming an open and truly inclusive government that represents the will of all the people of Afghanistan and has representation from all sections of their society, including major ethnopolitical forces in the country.

The declaration said the inclusion of all sections of the society in the administrative and political structure is imperative for the successful national reconciliation process in the country.

Recalling the relevant UN resolutions on Afghanistan, the participants noted that the UN has a central role to play in that country and that its continued presence there must be preserved.

The officials also emphasised the importance of ensuring that the fundamental rights of women, children and minority communities are not violated.

In his comments, Doval said it is time for closer consultations, greater cooperation and coordination among the regional countries to deal with the challenges emanating from Afghanistan.

“We all have been keenly watching the developments in that country.

These have important implications not only for the people of Afghanistan but also for its neighbours and the region,” Doval said.

“This is the time for close consultation amongst us, greater cooperation and interaction and coordination among the regional countries,” he said.

India invited China and Pakistan too but both the countries decided not to attend it.