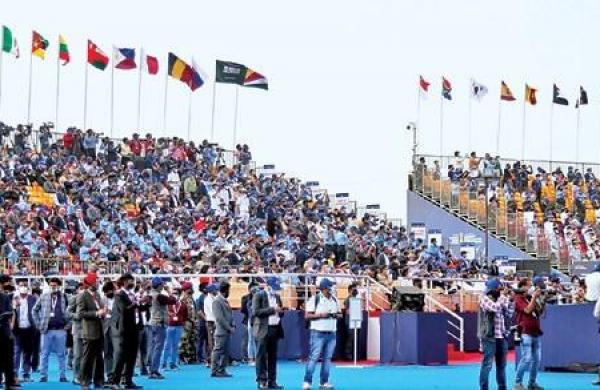 By Express News Service
BENGALURU: Touted as the first-ever hybrid aviation event in the background of the Covid-19 pandemic, Aero India 2021 on Day 1 on Wednesday clearly reflected the ‘work from home’ culture with a majority who would otherwise have attended the event, staying away from it and resorting to WFH –only this time it is ‘watch from home’! This, despite the event being cut to just three days.

The C-17 Globemaster flanked bytwo Sukhoi SU-30s captivates the audienceWith the novel coronavirus clipping the wings of the mighty air show, the event organisers, the Ministry of Defence, had provided a virtual link (aeroindiavirtual.in) to “attend” the event without actually being present at Air Force Station Yelahanka. Apparently, a majority have used that route to “be” at the air show, rather than being physically present.

For instance, even the Air Chiefs Conclave, which was participated by 26 countries, 14 air chiefs participated virtually.Not surprisingly, Air Force Station Yelahanka – the venue of the show – wore an almost barren look even on its very first day, which otherwise visibly bustles with activity.Checking at the entry points of the venue was doubly strict. It was not just for the otherwise cliched wariness about a possible terror attack, but equal (or even more) attention was given to ensure that the ‘invisible terror element’ – SARS-CoV-2 virus – did not enter the premises.

Teams of health workers were stationed alongside weapon-wielding hefty security men to check for minute details about the Covid-negative certificate that had been mandated to be carried by all those entering Air Force Station Yelahanka for the event.An MoD official said: “Look at the irony. This little, invisible virus has more than drastically cut down the size of the physically attending population at this air show which is touted as our biggest aviation event.”However, he pointed out that it was more important to look at the business conducted rather than the numbers of those who attended the event. “That, we will have to wait and see,” he added.