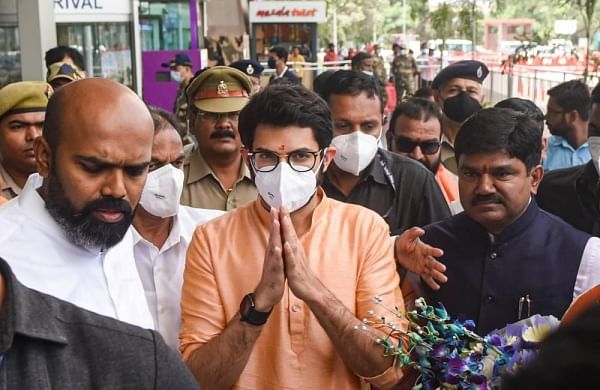 LUCKNOW:  Maharashtra cabinet minister and son of CM Uddhav Thackrey, Aditya Thackeray, who reached temple town of Ayodhya and had darshan of Ram Lalla on Wednesday, resolved to serve people better with his blessings. He along with thousands of Shiv Sainiks was on a day-long visit to Ayodhya and offered prayers at the Ram Temple on Janmbhoomi premises.

On his first visit to the temple town after becoming the minister in Maha Agadi government, Aditya visited Janambhoomi premises, Hanuman Garhi and also participated in Saryu ‘aarti’ at the banks of the holy river in the evening. The Shiv Sena leader also met his party functionaries and interacted with the media.

While interacting with media persons after taking darshan of Ram Lalla, Thackeray expressed his gratitude to the people of Ayodhya for giving him a rousing welcome and promised to visit the temple town again. He said that he was visiting Ayodhya as a Ram devotee as Lord Ram and Goddess Sita were there in his heart.

“We all are the descendants of Lord Ram and we are related to the people of Ayodhya. We come here to seek the blessing of Lord Ram so that we can serve the people. No politics is involved in it as it is a matter of faith for us and for the whole country,” he said.

When asked about the controversy over the Gyanvapi mosque and the ongoing litigation, Aditya Thackeray refused to get dragged into it saying since he was in Ayodhya so he would talk only about Ayodhya.

On being asked about the Enforcement Directorate (ED) grilling Rahul Gandhi in the National Herald case, Thackeray claimed that central agencies had turned more into advertising literature of the BJP.

Thackeray also claimed that his father and Maharashtra CM Uddhav Thackeray would soon speak to his UP counterpart Yogi Adityanath to ask for some space where a Maharashtra Sadan could be built in Ayodhya to facilitate the stay of Maharashtra devotees in the temple town.

Earlier, on his arrival in Lucknow on Wednesday morning, Aditya Thackeray steared clear of politics at the airport saying:  “We have been coming to Ayodhya and Lord Ram is in our hearts. Even in 2018, when I came for the first time, we had said ‘Pehle Mandir Fir Sarkar’ (first the temple then the government).

That created an atmosphere and the Supreme Court gave its decision in favour of temple in 2019. Now after the order of the court, the construction of Ram Temple has finally started. I am here to pray and seek blessings of Ram Lalla to serve people better.”

On the question of protest by a group of seers in Ayodhya against his visit, Thackeray said, “I won’t get into any allegation or counter allegation. This is a holy place and politics should be kept away from it. This is the land of Ram Rajya and the faith of crores of Indians is linked to Ayodhya. We are ardent followers of Lord Ram and today I am here only for darshan. We pray that we perform only good deeds.”

It may be mentioned that the priest of Hanuman Garhi Mahant Raju Das and some other seers of the temple town had opposed Aditya Thackeray’s visit accusing the Maharashtra government of inaction in case of lynching of two seers in Palghar in 2020.

The seers of Ayodhya also accused Thackerays of “shunning Hindutva and belying the ideals of Shiv Sena founder Bala Saheb Thackeray for the greed of power.”

The Ayodhya district administration had made all preparations beforehand for Thackeray’s visit. Around 1,051 lamps were be lit for Saryu aarti. He performed Abhishek of River Saryu with 1.5 tonnes of milk.