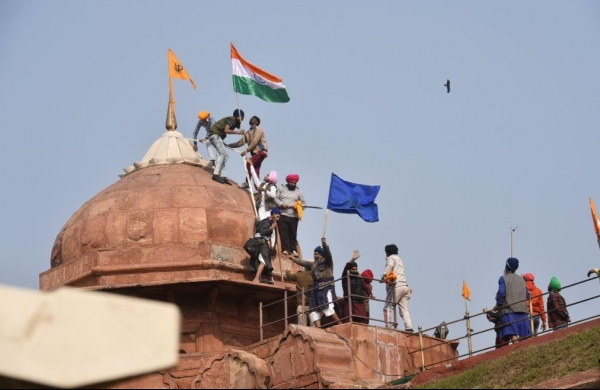 By ANI
NEW DELHI: Sukhdev Singh, an accused in Republic Day violence in the national capital visited the Singhu border after the incident and later went to Punjab, informed Delhi Police sources.

He was one of the prime accused who participated in the 26 January violence at Red Fort.

“He was present at the Red Fort till around 10 PM on the day of the violence and went to Singhu border late night,” informed Delhi Police sources.

According to Delhi Police, Singh was leading the mob at the Red Fort and his role in the violence was found to be very active. Notably, a reward of Rs 50,000 was announced on him.

On Republic Day, protestors did not follow the prearranged route and broke barricades to enter Delhi, clashed with police, and vandalised property in several parts of the national capital during the farmers’ tractor rally. They also entered the Red Fort and unfurled their flags from its ramparts.

Police had also announced a reward of Rs 50,000 each for the arrest of Jajbir Singh, Buta Singh, Sukhdev Singh, and Iqbal Singh for their alleged involvement in the January 26 violence, according to the Delhi Police.

Farmers have been protesting at the different borders of the national capital since November 26 against the three newly enacted farm laws: Farmers’ Produce Trade and Commerce (Promotion and Facilitation) Act, 2020; the Farmers Empowerment and Protection) Agreement on Price Assurance and Farm Services Act 2020 and the Essential Commodities (Amendment) Act, 2020.