According to the instructions of Collector Shri Rathore, the labor officer took benefit of departmental schemes 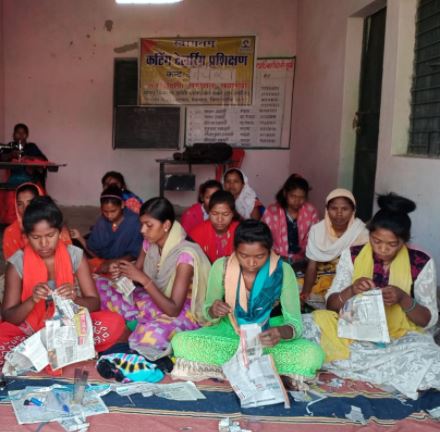 Smt Pawan Kumari, who hails from village Bachara under development block Khadgawan, was provided a sewing machine by the labor department in the year 2019, which provided her a means of continuous livelihood and enabled her to financially support her family. As directed by Collector Shri SN Rathore, Smt Payal Sharma, Labor Department Officer, approached Smt. Pawan Kumari to get feedback from the beneficiaries under the departmental schemes, while expressing gratitude to the Chhattisgarh Government Labor Department and the District Administration. After getting the machine, he started earning about Rs 4000 per month in the beginning by doing sewing and embroidery work. Encouraged by this, he decided to proceed in this field and started training himself in tailoring. With this, their monthly income has increased to more than five thousand rupees. She is happy that she is now able to financially support her family.
The labor officer told that under Chhattisgarh Government Labor Department, Chhattisgarh. Under the building and other construction workers welfare board, Mrs. Pawan was registered as a laborer in the labor department. After registering with the department, he got information about various schemes run by the department through camps-conferences and other publicity programs organized in the district. In the session 2015-16, online application was sent to the office for skill upgradation training under the Chief Minister, Construction Worker Skill Development and Family Empowerment Scheme. In the same session, his application was approved by the office as per eligibility and under the said scheme, he was imparted training in tailoring through a vocational training provider. After training, a total amount of 6 thousand 572 rupees was also provided to Mrs. Pawan Kumari as a certificate of tailoring training and honorarium under the said scheme. Giving information in this regard, the labor officer said that at the meeting of the deadline by Collector Shri Rathore, all the departments were instructed to take their feedback from the beneficiaries benefiting from the departmental schemes, in which we contacted the beneficiary Mrs. Pawan Kumari.