Accompanied by 2 CMs and Modi’s minister, Himanta files nomination amid cheers by sea of supporters 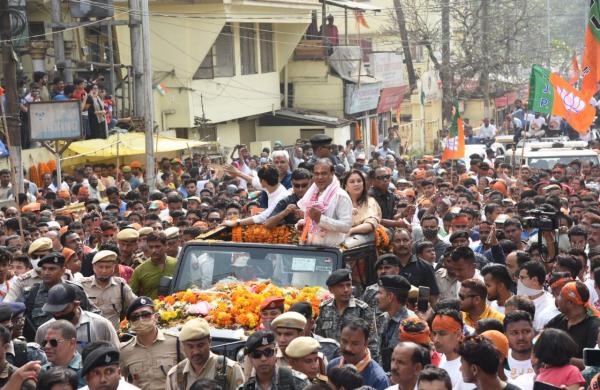 Express News Service
GUWAHATI: In a show of might that could befit royalty, Assam Minister and BJP’s Northeast face Himanta Biswa Sarma filed his nomination paper in the presence of two Chief Ministers and some BJP Central leaders on Friday.

It is rare that the Chief Minister of another state attends a mere filing of nomination paper by a leader.

He is contesting from the Jalukbari seat, which covers parts of Guwahati and the city outskirts. The four-time powerful Minister has held the prestigious seat since 2001.

“I seek the blessings of people for the candidates of BJP and (its allies) AGP (Asom Gana Parishad) and UPPL (United People’s Party Liberal),” Sarma told journalists after filing his nomination.

Earlier in the day, after offering his prayers at the Kamakhya temple, he had told journalists that he was confident of a big win.

“I had lost the 1996 elections by a few thousand votes. I won all subsequent elections. My margin of victory also increased every poll. I had won the 2016 election by 86,000 votes. This time, there are 2.02 lakh voters (in the Jalukbari seat). I am confident that I will win by 1.2-1.5 lakh votes,” the Minister said.

As his open vehicle was heading to the RO’s office, the supporters cheered, danced, and shouted slogans in his favour as well as in favour of BJP and Prime Minister Narendra Modi. He accepted floral garlands and “gamosas” from supporters and waved at them all the way.

Both Sonowal and Singh exuded confidence that the BJP would be able to retain power for its various development initiatives and good governance.

A master election strategist who is widely known for his political acumen, Sarma was instrumental in scripting BJP’s victory in Assam and some other states in the Northeast.