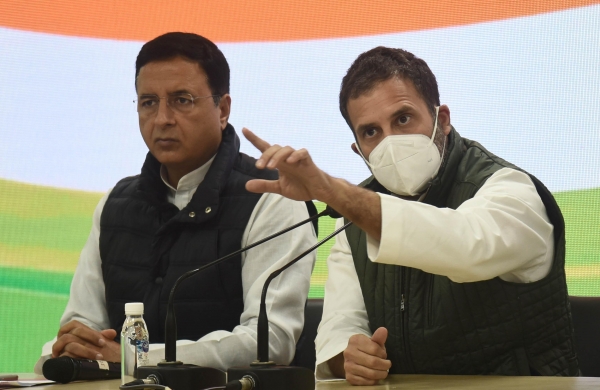 By PTI
NEW DELHI: Congress leader Rahul Gandhi on Friday warned that the farmers’ agitation will spread across the country if not resolved soon and asserted that the only solution to the issue was to throw the new agri laws in the “waste paper basket”.

Addressing a press conference, he launched an all-out attack at the Centre and accused it of trying to intimidate and discredit the agitating farmers, by even using the National Investigation Agency.

Gandhi said the prime minister should not think that this agitation will stop here, adding it will spread in the cities, urban areas and slums as the youth there also also angry with this government as they do not see any future.

“I am telling the prime minister that this the country will suffer due to this. You should talk to the farmers and resolve the situation by taking back these laws, otherwise the country will be hurt. This instability will not help and benefit the country. This instability will not go unless you correct the injustice done,” he said, adding that the government should talk to farmers and resolve the issue soon.

Gandhi later tweeted in Hindi, “You will not be able to break the courage of farmers by either stone-pelting at Sindhu border or by deploying police at Gazipur or by any other conspiracy. The entire country is standing with them and you cannot intimidate them.”

In his remarks at the press conference, the former Congress chief said the government is trying to discredit the farmers and the prime minister will have to listen to the voice of the people.

Gandhi said that action should be taken against those few who indulged in violence on Republic Day, but the government should not disregard the voice of lakhs of farmers protesting peacefully against the farm laws.

“The prime minister will have to listen to the voice of the people and if he does not, this (movement) will spread and cannot be suppressed. He asked the government to resolve the issue as this will not benefit the country.”

“You should quickly resolve this and not waste time. You should talk to farmers as soon as possible and resolve their grievances and douse the situation.”

Gandhi asserted that the only solution is repealing these laws and “putting the laws into the waste paper basket”.

Asked about the Republic Day violence, he said, “Who allowed the farmers to enter the Red Fort; is it not the home ministry’s job to stop them from doing so.”

Gandhi also demanded the resignation of Union Home Minister Amit Shah for his failure in handling the Red Fort incidents, but said he does not expect him to quit alleging that the BJP does not take responsibility for its actions.

Citing the situation in Covid times, he said the poor got poorer and a handful of rich people just got richer and richer.

“This anger that you are seeing among the farmers, this is that anger that 5-7 people have everything, we have nothing,” he said.

Elaborating on the farm laws, Gandhi claimed the first law destroys the mandi system and the agricultural markets of this country, while the second law allows unlimited storage of grain and other materials and will make it practically impossible for our farmers to negotiate their prices.

The third law basically says that if the farmers have grievance, they cannot go to court, he added.

Thousands of farmers, mostly from Haryana, Punjab and Uttar Pradesh, have been protesting at several border points into Delhi since November-end, demanding repeal of the three laws and a legal guarantee to the minimum support system for their crops.

Enacted last September, the three laws have been projected by the Centre as major reforms in the agriculture sector that will remove middlemen and allow farmers to sell their produce anywhere in the country.

However, the protesting farmers have expressed their apprehension that the new laws would pave the way for eliminating the safety cushion of the MSP and do away with the wholesale market system, leaving them at the mercy of big corporates.