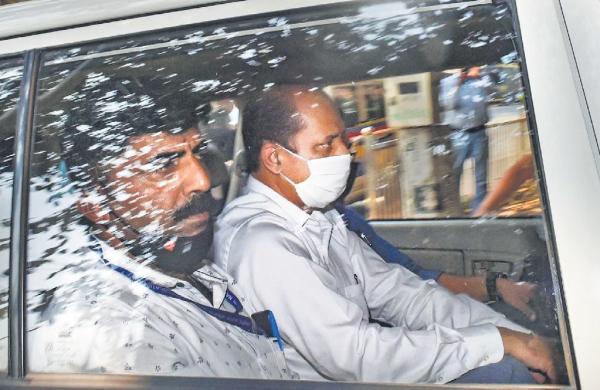 Express News Service
MUMBAI: Arrested by the NIA over his role in allegedly placing an explosive-laden vehicle outside the residence of India’s richest man Mukesh Ambani, 49-year-old encounter specialist Sachin Waze has always been in the thick of controversy.

Waze who hails from Kolhapur has been involved in 63 encounters with criminals in his police career after starting as a sub-inspector in 1990 in the Naxalite area of Chandrapur in Vidarbha. Later, he moved to Thane and Mumbai and made a name for himself by cracking several complex cases. Another encounter specialist Pradeep Sharma was his mentor.

In 2003-2004, Waze got suspended by the Bombay High Court at the peak of his career over the death of a prisoner Khwaja Yunus who was an accused in the Ghatkopar bomb blast of 2002. The BJP, which had backed Waze at the time, now wants strict action against him. Later, he officially joined the Shiv Sena in 2009. After 16 years, Waze was not only reinstated in 2020 but given important cases for probe by the Uddhav Thackeray government in Maharashtra.

According to senior journalist S Balakrishnan, Waze was virtually number two in the Mumbai police after the city’s police commissioner. “Waze wielded a lot of power in the police force because of the blessings of political leaders. He was good in cybercrime such as hacking emails, social media accounts, phone tapping. After his suspension, he ran his own cyber-security-detective firm as well,” said Balakrishnan.

He said that in Mumbai, Waze was promoted and encouraged by the IPS lobby in a bid to end organised underworld crime in Mumbai. “Once organised crime was ended, encounter specialists turned into extortion specialists. The greed to earn more forced them to threaten and extort money from big businessmen, underworld dons, bookies etc. This was very easy money for them. With one phone call, they used to get Rs 1 to Rs 2 crore,” a senior journalist added.

A senior officer in the Mumbai police said Waze was so important that while you could easily meet the police commissioner, it was difficult to meet him.

“Even deputy level police officers had to wait in front of his cabin. Waze was just an API but was still given charge of the important crime investigation unit. That is generally given to a Police Inspector or Senior Police Inspector, but Waze got it through his political connections. He was always on the hotline with Shiv Sena leaders. Even in the case involving Republic TV owner and editor Arnab Goswami, no one wanted to arrest him because of his connections with top BJP bosses in Delhi. But Waze orchestrated the plan and arrested Arnab early in the morning from his residence. That is really an appreciable quality in him. But he often misused his office for personal gains,” said the officer who requested anonymity.

During their search, the NIA seized a Mercedes allegedly used by Waze with Rs 5 lakh in cash and a note counting machine. Waze also owns a BMW and is a director, owner and co-owner in multiple real estate and development projects. Before the arrest, Waze boasted to reporters at the Mumbai police headquarters that he did not own a Scorpio and never used a manual vehicle. “I like only automatic vehicles, that too imported ones, not local,” he said.

“Mansukh Hiren whose Scorpio was found abandoned with gelatin sticks outside Ambani’s residence was a friend of Waze. He was involved in Waze’s operations on several occasions. However, their gameplan to issue a bomb scare to Ambani has been exposed and tarnished the image of the Mumbai police. The key witness Hiren lost his life and Waze is behind bars so this murky saga is unlikely to end soon even though the top cop of Mumbai has been shunted out,” said the police officer.