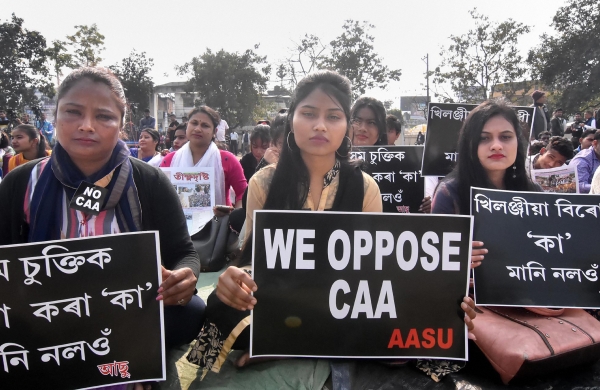 By PTI
GUWAHATI: All Assam Students Union (AASU) on Saturday announced that it will hold agitations during Prime Minister Narendra Modi’s visit to the state on February 22 to protest against his government’s alleged failure to implement Clause 6 of the Assam Accord.

Member of the students’ organisation will wave black flags and wear black badges at all district and sub-divisional headquarters, AASU President Dipanka Kumar Nath and General Secretary Shankarjyoti Barua said in a release on Saturday.

The BJP-led government at the Centre has failed the people of Assam by not implementing Clause 6 of the Assam Accord, failing to declare floods and erosion as national problems and not stopping construction of all big dams in the region, including the Lower Subansiri Hydroelectric Project.

Nath and Barua that during floods, the prime minister did not bother to visit Assam and had merely reviewed the situation over phone.

“But now that state election is round the corner, he has come thrice within a month to seek votes,” they said.

The AASU leaders said that before the 2016 Lok Sabha election, the prime minister had said that all illegal immigrants will have to pack their bags and leave.

“But the Centre is now conspiring to impose the burden of additional foreigners on Assam by enacting the Citizenship Amendment Act (CAA).

The prime minister during his two earlier visits did not make a single mention of the implementation of Clause 6 of the Assam Accord, they added.

The Centre had promised that it will implement the recommendations of the High Level Committee to the last comma and full stop.

It is now nearly a year that the report was submitted to the state government but it is yet to be sent to the Centre for its implementation, they said.

“We demand that the prime minister announces on February 22 when the recommendations of the Committee will be implemented as constitutional safeguards are a legitimate rights of the people of the state”, the leaders said.

AASU had organised protests against Modi’s visit on January 23 demanding repeal of the Citizenship Amendment Act hat seeks to grant Indian citizenship to non-Muslim religious minorities from Bangladesh, Pakistan and Afghanistan and implementation of Clause 6 of the Assam Accord.

As per the clause constitutional, legislative and administrative safeguards, as may be appropriate, shall be provided to protect, preserve and promote the culture, social, linguistic identity and heritage of the Assamese people.