AAP MPs marshalled out of Rajya Sabha over unruly behaviour 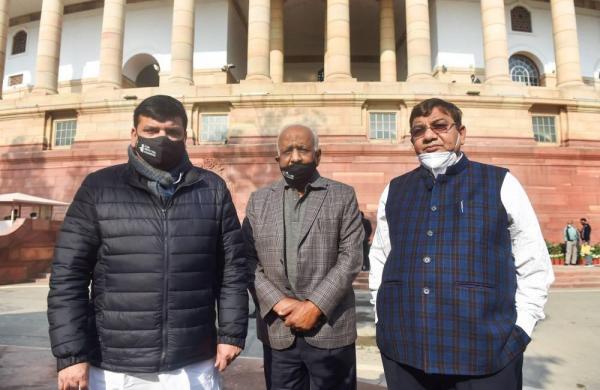 By PTI
NEW DELHI: Three Aam Aadmi Party (AAP) MPs, including Sanjay Singh, were on Wednesday marshalled out of Rajya Sabha after they disrupted proceedings over the three contentious farm reform laws and refused to heed to Chairman M Venkaiah Naidu’s plea for order.

The slogan-shouting AAP members stormed into the Well of the House just as the Rajya Sabha took up a discussion on a motion thanking the President for his address to the joint sitting of Parliament.

Naidu repeatedly asked them to return to their seats and not disrupt the proceedings.

But with his requests going unheeded, the chairman invoked rules of the House to suspend them for the rest of the day and asked them to withdraw from the House.

As they refused, he briefly adjourned the proceedings.

The MPs, however, did not go out of the House and continued raising slogans when the Rajya Sabha resumed functioning.

Naidu again asked them to withdraw from the House and upon their refusal, he ordered marshals to escort them out.

The unruly scenes started soon after the Chair announced consensus between the government and the opposition on extending the duration of the debate on a motion thanking the President for his address to the joint sitting of Lok Sabha and Rajya Sabha at the start of the Budget session last week.

An extra five hours that took the duration to 15 hours was to allow members to raise the issue of farmers’ protests.

As the AAP MPs stormed into the Well, Naidu warned that he would name them if they did not go back to their places.

When a member is named by the Chair, he or she has to withdraw from the House for the rest of the duration of the day.

But the AAP members refused to heed to his pleas.

“I am compelled to use Rule 255. Sanjay Singh, Sushil Kumar Gupta, N D Gupta, all of these members are named as per Rule 255. Please withdraw from the House. Please go out of the House,” Naidu said as they continued raising slogans.

Rule 255 of Rules of Procedure and Conduct of Business in the Council of States (Rajya Sabha) is regarding ‘withdrawal of member’.

Under the rule, the chairman may direct any member whose conduct is in his opinion grossly disorderly to withdraw immediately from the Council, and any member so ordered to withdraw shall do so forthwith and shall absent himself during the remainder of the day’s meeting.

After asking the three members to withdraw, the Chairman briefly adjourned the House till 9.40.

When the Rajya Sabha re-assembled, Naidu again asked the three AAP members to leave the House.

“Please withdraw from the House, otherwise I will have to send you out. Please leave the House. Don’t create a situation where I have to call the marshals and send you out. That is most unpleasant,” Naidu said.

As the AAP MPs did not withdraw, the Chairman said: “Please Marshals, help them to leave the House”.

As members continued to raise slogans from the lobby after they were removed from the House, Naidu said that they be cleared from there so as not to distract other MPs.

The trouble started when Naidu called for taking up the ‘Motion of Thanks on the President’s Address’.

Sanjay Singh started speaking, but Naidu asked him to return to his seat saying he would get a chance to speak.

“This is not the way. One person disturbing the House and not allowing the discussion to take place, including on farmers issues,” the chairman said.

The other two AAP members too joined the issue with Singh.

“You are not doing anything good to the kisans (farmers). You are hurting their interest by stopping the discussion. We are going to discuss President’s address and also farmer issues,” Naidu said and warned them.

However, the AAP members continued to protest in the Well.

“They want a discussion. When the discussion is going to begin, they obstruct the House, and the House, the entire country watches this.”

“And this is the behaviour of people who want to rule or are ruling in certain parts of the country. This is not fair for anybody, any party. I am not naming any party,” Naidu said before adjourning the House briefly till 9.40 am.

The chairman said stressed the debate on farmers issue should happen and the government and opposition together should find a solution.

Later, members started speaking on the Motion of Thanks on the President’s Address.