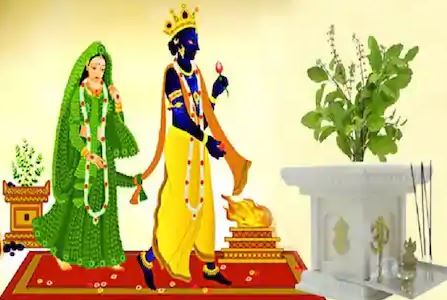 On Kartik Shukla Ekadashi (Devuthani), preparations are being made loudly for the marriage of Tulsi in every house on Wednesday evening. Sugarcane is being sold in the morning to decorate the pavilion around the basil plant. Smiles are seen on the faces of those who sell sugarcane on the road in every square, squares, mohallas. Crowd of people is buying sugarcane. Sugarcane sellers told that sugarcane shops are adorned in every locality of the capital at 15 to 20 places. There are more than one thousand shops in the entire capital. Since sugarcane is bought in every household, it is estimated that sugarcane worth Rs 30 to 40 lakhs will be sold in a few hours.

Harish Nishad, a young man who came to sell sugarcane from Nawagarh Bemetra, told that he has been selling sugarcane for the last five years, two or three young people also come with him. Every year during Tulsi Puja, they do a business of 30 thousand on a single day. Like them, more than 200 traders bring sugarcane from the villages. After this, the local youth sell sugarcane easily in many places.

Today, thousands of men and women flock to the market to buy sugarcane. Usually all the shopkeepers sell four to five thousand rupees. According to one thousand shopkeepers, business of 40-50 lakhs is done. This is the reason that people from village to village come to Raipur to sell sugarcane. People selling sugarcane have come from villages like Bemetra, Mandir Hasaud, Bhatagaon, Patan, Amaleshwar, Mana etc.

Various kinds of fruits like sitaphal, amla, sweet potato, ber, singhada, bhaji and roli, sandalwood, kumkum, coconut, etc. are being sold in many places in the market. In many areas including Shastri Bazar, Golbazar, Amapara, Purani Basti, Gudiyari, Fafadih Tikrapara, there is a rush to buy worship material.