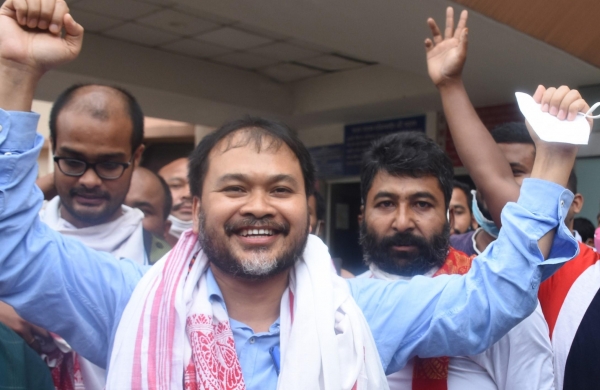 By PTI
GUWAHATI: The movement against the Citizenship Amendment Act that rocked Assam will be revived, MLA Akhil Gogoi said on Friday.

Speaking to reporters at Nagaon, Gogoi said the leaders of the movement betrayed the people of the state while he was kept in jail.

“Now that I am out, I want to assure the people that the anti-CAA movement will resume. No (illegal) foreigner will be allowed to stay in the state,” he said on the way to his constituency Sivasagar, a day after he was released from jail.

Gogoi spent nearly 19 months behind bars for his alleged role in the violent protests against the Citizenship (Amendment) Act in December 2019.

He fought and won the recently-concluded assembly elections from the jail.

Gogoi alleged that the BJP-led state government was not sympathetic towards the problems of the people.

“I will raise the issues of big dams and toll gates in the state Assembly. If the government fails to give a proper response, we will have to take the path of agitation,” he said.

On the way to Sivasagar, around 400 km from Guwahati, Gogoi had to stop multiple times as his supporters and locals lined the roads cheering for him.

“This outpour of people’s love for a jailed person like me proves that I was wrongly confined. The BJP kept me behind bars and won a second term but this won’t happen again. In 2026, a new government will be formed. The BJP ‘hatao’ (remove BJP) movement starts from today,” the Raijor Dal president asserted.

This was the first time that Gogoi shall be visiting Sivasagar after being elected.