A big shock to Team India, Ravindra Jadeja out of T20 series 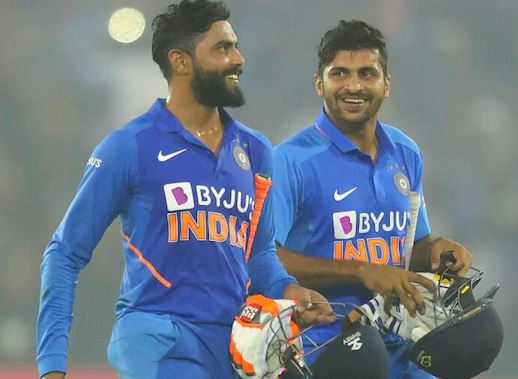 The T20 series is being played between India (Australia) and Australia (Australia). Before the second match of this series, Team India suffered a big setback. All-rounder Ravindra Jadeja has been dropped from the team. This decision has been taken due to injury to him. Let us know that on their own, Team India has won the last ODI and the first T20 match. But now due to injury, he will not be able to play the series further.

Fast bowler Shardul Thakur has found a place after Ravindra Jadeja was dropped from the team. The Board of Control for Cricket in India gave an update about Jadeja’s health. He said Jadeja is under surveillance and will be taken for further scans if needed on Saturday. Jadeja, who led India to a stunning score of 161 runs, was hit at the helmet in the final over of the innings, while earlier he was troubled by a leg.

The BCCI has issued a statement in this regard. He said, “Ravindra Jadeja maintained a continuity after injuring his forehead on the left over of the first over of the first innings of the first T20 match against Australia in Canberra on 4 December 2020. He was confirmed sick by the BCCI medical team on the basis of clinical evaluation in the dressing room during the innings break. Jadeja is under observation and will be taken for further scans if required based on the assessment on Saturday morning. He will not take part in the series further. “