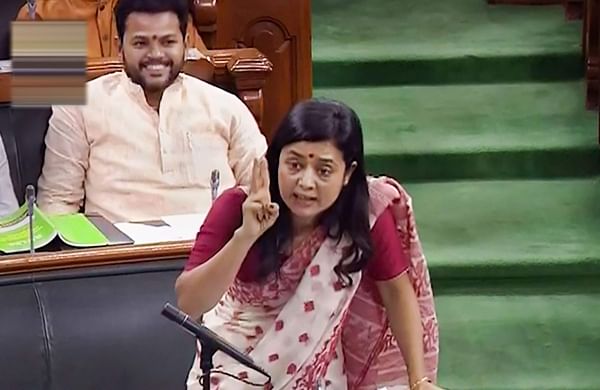 NEW DELHI: All India Trinamool Congress MP Mahua Moitra on Wednesday said that the BJP’s campaign of 80% versus 20% will destroy 100% of India.

Speaking on the Motion of Thanks on the President’s address to the joint sitting of Parliament, Moitra lashed out at the Modi government saying, “They want to alter history, they are fearful of the future and they mistrust the present.. You fear a future India which is comfortable in its own skin, which is comfortable with conflicting realities… You are not content with just the vote, you want to get inside our heads, inside our homes, to tell us what to eat, what to wear, who to love. But your fear alone cannot keep the future at bay.”

The Trinamool MP said this government is very insecure and its insecurity is reflected in the way it disallowed tableau on Subramaniam Bhartia, VR Pillai,  Sri Narayan Guru and Netaji Subhash Chandra Bose. She said, “The government was trying to reinvent (VD) Savarkar as some kind of a freedom fighter, but is afraid of the real heroes of our country.”

She said India has been downgraded by Freedom House from free to partly free. It has become the most dangerous place for journalists to work in the world. “The government mistrusts our annadatas… you withdrew the farm laws fearing defeat in elections in western Uttar Pradesh. But this time the chowdharys will not forget you. They will not forget how the son of your minister drove cars over farmers killing them. The MP said the government has spent taxpayers’ money to buy Pegasus and spy on people.”

She concluded her speech by quoting a poor voter from her parliamentary constituency in West Bengal who told her “Ma, for you it’s a battle of ideology, but for us it’s a battle for survival.”

She appealed to the judiciary to play its role by saying “you are all that we have… do not fail us.”